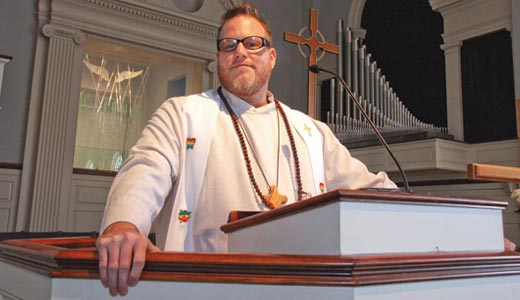 “I had to get off the fence in order to be part of the conversation,” said Rev. Ryan Kemp-Pappan, an ardent supporter of gay rights.Photo: Frankie Steele

When the Rev. Ryan Kemp-Pappan began calling around to area churches in 2008 to solicit membership for the then-dormant group Faith Leaders for Fairness, the response was mixed. Clergy — at least the ones who returned his phone calls — said that while they supported gays, lesbians and transgender people showing up in the pews on Sunday, they couldn’t say so from the pulpit.

“Some would say, ‘I support this, but I can’t openly say this in my community,’” says Kemp-Pappan, associate pastor at Douglass Boulevard Christian Church. “Their community is being more conservative.”

Challenging climates like this are nothing new to him. As a student at Austin Presbyterian Theological Seminary in Texas in 2007, Kemp-Pappan joined the fight for same-sex housing rights after a classmate was denied access to the chapel for a blessing ceremony between her and her partner. “To us, that felt hypocritical to the proclamation and application of the gospel,” says Kemp-Pappan, who is straight. “I had to get off the fence in order to be part of the conversation.”

He and fellow activists eventually succeeded in having housing rights granted to same-sex couples at the seminary despite being denied use of the chapel for commitment ceremonies, but that campaign marked the beginning of his work as a gay rights activist. “It was my first real experience organizing activism and being an ally to the gay community.”

At Douglass Boulevard Christian Church, same-sex couples regularly attend services there thanks to its policy as an “open and affirming” institution. This policy is part of the church’s progressive gospel, which dispels the stereotype that homosexuality has no place in the church.

“Traditionally, religion has been used as a way to oppress or dehumanize people in the queer community — to be Christian means that you must be x, y and z,” he says. “Our mission, our purpose centers on the idea that we are open to the community, we are affirming diversity.

“What really matters is that we love our neighbor, feed the hungry, stand with those in the margin, with those that are oppressed and abused by these systems.”

This mission carries over into his work on the board of Faith Leaders for Fairness, which has met three times, has a Facebook group and will be part of the march in Friday night’s Kentuckiana Pride Festival parade. Later this summer, on July 27, FLF and Douglass Boulevard Christian Church will present a screening of “Fish Out of Water,” a documentary exploring the relationship between homosexuality and the Bible.

The seeds of FLF took root during the campaign to pass the 1999 Fairness Ordinance. “What the campaign learned leading up to the battle for that ordinance is faith communities are one of our strongest allies,” says Chris Hartman, director of the Fairness Campaign. Support from religious leaders like Kemp-Pappan is critical to the passage of a statewide fairness ordinance by virtue of the fact that their messages reach large groups of people.

“As we gear up to try to pass a statewide fairness law, faith leaders will play one of the most important, if not the most important roles, particularly in our rural communities,” Hartman says. “Our allies aren’t always deep in some faith communities, and we have a problem sometimes connecting and communicating with these folks. (Faith leaders) bring their congregations along.”

There are indications that the message is having an effect on lawmakers. Last year, the Rev. Albert Pennybacker, chairman of the religious leaders group of the Kentucky Fairness Alliance, spoke at a statewide fairness coalition rally in Frankfort after 10 state representatives and four senators sponsored a fairness law, the most support that initiative has ever received, Hartman says.

And there are indications that FLF and its supporters have miles to go to effect lasting change. This is no more apparent than in the case of Todd Eklof. In 2004, in response to the General Assembly’s passage of an amendment outlawing gay marriage, Eklof, a reverend at Clifton Universalist Church, announced that he would no longer marry any couples until he could marry all couples. Kentucky Farm Bureau subsequently fired him, originally listing the cause as performance and attendance issues. Eklof sued for wrongful termination, noting that none of those problems were pointed out in a performance evaluation less than a month before he was fired.

In 2007, former Farm Bureau president Sam Moore admitted under oath that the company fired Eklof for supporting gay marriage. Eklof is due back in Circuit Court June 23 for a mediation hearing.

In a recent interview, Eklof says he is curious why more class-action lawsuits haven’t been filed over amendments aimed at protecting the sanctity of marriage. “That is an explicit religious reference, and those laws are unconstitutional as far as I’m concerned,” Eklof says. He’s now full time at Clifton Universalist, a sect that has had gay priests and laity in its congregation since the 1970s.

He thinks that part of the state’s reason for slow-walking a same-sex marriage law might have to do with what the Rev. Martin Luther King Jr. called the “intoxicating drug of gradualism.”

“He had the same thing happen to him: ‘You know, Martin, let’s not jump into things too heavily. Things are slowly progressing, with the talk about civil unions and giving people a different category,’” says Eklof, who calls civil unions a subtle form of segregation.

If all churches and followers of Christ read the teachings of Jesus more closely, the issue of whether gays and lesbians can marry would be a no-brainer. “It’s astonishing to me that most of these headline Christian organizations seldom ever quote a teaching of Jesus,” Eklof says. “I think it’s because we all know what Jesus stood for.”