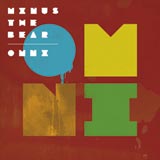 Seattle-based Minus the Bear have spent most of this century making a name for themselves as a band known more for potential than anything. As post-rock holdovers, they introduced that style’s proggy song structures and interspersed guitars to a light and breezy brand of indie-pop. On their latest, Omni, the band has pushed themselves further toward the latter style, keeping things smooth and slick. And this time around, they’re trying to sleep with you. Contrived come-ons have littered indie rock ever since Justin Timberlake led the charge in bringing sexy back, but Minus the Bear’s attempt lands somewhere between Maroon 5 and a Carlton Banks pick-up line. Synthesizers dominate the mix, with “Secret Country” providing the guitars their only opportunity to flex their muscles. Elsewhere, songs like “The Thief” and “Summer Angel” venture into sweater-vest funk, while “Into the Mirror” describes drugged out sexual encounters that stand at odds with the staid and uninterested way in which they’re recounted.