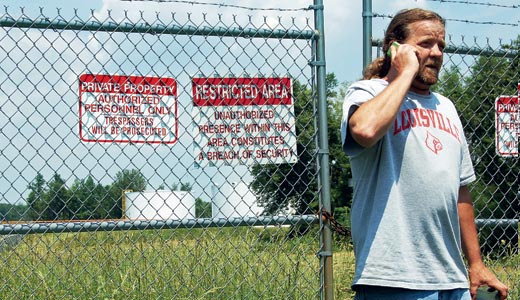 One week after German energy conglomerate E.ON AG announced a $4.5 billion spike in quarterly profits, officials with the Metro Division of Solid Waste held a public hearing in southwest Louisville to give area residents a chance to weigh in on a proposed 60-acre coal ash pond, which E.ON subsidiary LG&E wants to construct less than half a mile from Dave Smith’s Wilmoth Avenue home.

“The chemical plants pretty much run the show out here,” Smith, a 47-year-old, disabled Army veteran, says about his corporate neighbors in Louisville’s toxic Rubbertown neighborhood.

“I’ve had 13 seizures since I moved here about 20 years ago,” says Smith, who trained guerilla soldiers in Panama in the early ’80s. “I’ve got spots on my brain, and my doctor found a tumor in the middle of my brain, here,” he says, pointing to the top of his long-haired skull. “They don’t know what’s caused it, but luckily it’s benign.”

Along with Smith, roughly 150 people have shown up for the hearing, held in Conway Middle School’s crowded cafeteria, where the mood oscillates between acute rage and outright despair. Ron Gruzesky, manager of the Solid Waste Division, is trying to get the audience’s attention — he’s pulling double duty as the hearing’s emcee. After informing the audience that he won’t be answering any questions, Gruzesky briefly loses control of the proceedings. This evening, Solid Waste officials will just be punching bags, more or less, for an already incensed audience.

“Then what the hell are we here for?!” shouts a voice from the crowd.

At a cost of $54 million, LG&E’s proposed pond would house 5.7 million cubic yards of hazardous coal ash, whose contents contain carcinogens like cadmium, mercury, arsenic and chromium, to name a few, and will be located near the 5200 block of Cane Run Road — about 3,500 feet from Smith’s neighborhood of Riverside Gardens, and 2,000 feet from the banks of the Ohio River.

The pond, which is expected to reach a height of 14 stories, will be larger than the 5.5 million cubic yard Tennessee Valley Authority Kingston Fossil Plant ash pond, which ruptured in December 2008, inundating more than 300 acres with hazardous coal ash that slowly blanketed the landscape like a terrestrial version of the ongoing BP oil spill.

It should be noted that Metro Council members Judith Green, D-1, and Rick Blackwell, D-12, and 38th District state Senate Candidate Marty Meyer (who doesn’t even hold an office) are the only politicos at the hearing.

Taking the microphone, Councilwoman Green expresses anger at the idea of a new ash pond in an area already overrun by chemical plants, pledging that she and Blackwell will do whatever it takes to slow the permit process, possibly in the form of a Metro Council resolution.

Representatives from Kentuckians for the Commonwealth and the Sierra Club also are here, supporting residents with signs that read “Coal Ash Is Risky To Creation.” An elderly courtroom typist busily transcribes the residents’ soliloquies, which, it is hoped, will make their way before the eyes of LG&E’s stockholders.

“It’s upsetting, knowing that this is gonna affect me, my children,” a sobbing Deborah Madison tells the crowd. “Lives are at stake here. I’ve got rashes that my doctors can’t even identify … We don’t need another toxic dump in our backyards.”

“I’m here to represent myself and other residents of Riverside Gardens,” says Terri Humphrey, who also lives on Wilmoth Avenue. “We do not want this in our backyard. We already have a lawsuit against LG&E to stop what’s coming from its Cane Run plant and into our homes. We just can’t have this.”

After about 90 minutes of testimonials, Thomas Pearce of the Sierra Club makes a shocking discovery: “Hey, everybody!” he screams. “The LG&E guy is hiding in the hallway!”

Immediately people begin rushing out of the cafeteria to catch a glimpse of LG&E communications representative Brian Phillips. Some, like resident Monica Burkhead, do more than catch a glimpse.

“Would you want this in your backyard?” she bellows at the spokesman.

“Well,” replies Phillips, his face and neck flush with blood, “if it’s safely constructed, then yeah.”

“Bullshit!” Burkhead screams. She lays into him for a solid five minutes before concluding, “Remember my face: When I die, you’ll have to answer for it.”

Phillips later tells me the residents are misinformed, and that misinformation, in turn, fuels their emotions. It must be hard to have a job like his. When he says, “We have the public’s safety in mind,” it’s hard to weigh his reality against one that involves a billion gallons of viscous sludge.

But for Smith, Humphrey and the approximately 1,200 residents of Riverside Gardens, that threat isn’t just a possibility, it’s a way of life: LG&E currently operates a coal combustion waste landfill adjacent to the Cane Run coal plant, which the EPA lists among 44 “high-hazard” sites nationwide, which means a spill there would “result in significant damage or loss of life.”

“We simply live for today,” says Smith during a recent tour of his neighborhood. “We never look to the future, because there isn’t much of one.”

Smith estimates that at least a dozen people have died of cancer on his street within the last decade, corroborating EPA studies that state 1 in 50 adults living near such ash landfills are at risk of developing cancer.

“We’re just puppets for rich people,” he continues. “They could put windmills and solar panels out here, but they can’t make a profit from that. It’s cheaper for them to keep doing what they’re doing, dumping their toxic waste on us poor folk.”

He says he had his last seizure five months ago, and that his declining health is making it hard to keep up the fight. In that sense, another chemical dump fits right in given the area’s history.

On a blistering Thursday afternoon after the public hearing, Smith takes me out for a field trip. We’re just north of the proposed ash pond site, following a muddy ATV path carved by area youth not far from the Riverwalk bike path. Smith claims there are chemicals seeping through an underground landfill not far from his home, and he wants us to take a look. After several hundred yards of trudging through overgrowth and mud, I grow hot and skeptical.

“Ah,” Smith says. “There’s some right there.” He points at what appears to be an exposed tree root at the edge of the ATV-path.

Smith brandishes a pocket knife, bends down and proceeds to carve out a chunk of the “root,” which smells like rubber and bends like rubber.

“That ain’t no tree,” he says. “That’s a souvenir from Rubbertown.”