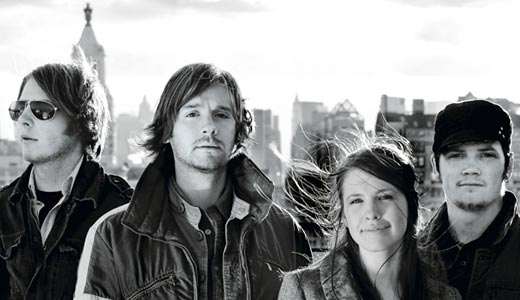 In 2005, few Louisville bands generated as much buzz as Cabin. They earned the ear of promoters who put them on supporting slots du jour with Von Bondies and VHS or Beta; they nearly sold out Headliners for the release of their debut, Govern The Good Life, WFPK had them in constant rotation and sales at ear X-tacy were brisk. Singer Noah Hewett-Ball’s solemn vocals and keys served as the centerpiece of a pop-rock group with robust momentum.

In the years following Govern, creative differences led to the original lineup splitting off to pursue other interests: Bassist Jake Heustis joined Wax Fang; drummer James Hewett filled the seat vacated by original Follow The Train drummer Andy Hurt for Mercury; and guitarist, keyboardist and singer David Cronin has recently completed a forthcoming solo album. Aside from the I Was Here EP, released on the Wisconsin-based label/management company Machine, Hewett-Ball went into hibernation with a new lineup: bassist Billy Lease, keyboardist and violinist Sarah Welder and drummer David Chale. Their result is Among The Rectangles & Changeable Parts, out now on the group’s new label, Oh Danger. Recorded mainly at Chale’s home studio, Deadbird, Rectangles thrives on sophisticated arrangements and tempo shifts, with the only familiarity being Hewett-Ball’s genteel, laid-back harmonies.

LEO: What were the goals this time around?
Noah Hewett-Ball: Goal No. 1 was to backpedal and have everybody learn the old stuff for a while. Then it was the same as, I guess, when we set out with the original members. We didn’t play a show for eight months while we tried to find something interesting to continue doing on a weekly basis. We wanted to see what everybody had and try to find something that piques everybody’s interest. I can’t say that we set out in any particular direction. With this group, it was re-learning strengths and weaknesses of each other and exploiting those.

LEO: Lyrically, how is your approach different from Govern?
NHB: On the last record, I was writing lyrics and music at the same time, and they were driving each other. There are a few songs on this record where the music sprouted wings and pushed it and created this template. Each part felt justified, but at the same time, there were no words to justify parts and why songs took a particular direction. Even far more challenging is trying to attach lyrics to music. You forget what that raw feeling was when you started. It was a challenge.

LEO: There’s a political theme to some of the lyrics on Rectangles. Thematically, what are you writing about this time around?
NHB: I’m not going to say the world’s changed, but I think there was a brief sea change in America as far as paying attention to politics and controversy over the last election. It was almost like there was this moment, after eight years of Bush, where everybody woke up long enough to elect someone. It’s hard for an artist not to pay attention to that and be affected by it. I try not to take any particular political stance, but comment on the absurdity of the polarization, the role of the media in all of it, and how used to taking sides everyone has gotten.

In my writing, I never try to stand on a soapbox. I feel like it’s one song at a time. Before the album was finished, some friends asked me what it sounded like, and I said that I’ve been looking at the bits and pieces for so long that I needed them to tell me what the umbrella looks like.

LEO: How was the process recording at Deadbird?
NHB: It’s two blocks over from our old studio (on South Preston). Dave lives there. It was a mechanic’s garage and used to be a corner grocery store at one point. We can have private shows while working on the record — 50 of our buddies can come over and drink beer and sample the new stuff. Dave came from IU, where he was studying audio. I think he had kind of been doing it all through high school and has a feel for the technical side of it all, putting things together on his own. We recorded a demo, and when we started mixing it down, we were all surprised with finished product. Halfway through, it was no longer a demo.