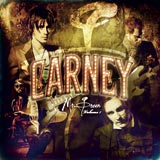 When staring at the cover of Carney’s debut album, Mr. Green Volume 1, I immediately assumed I would have about an hour’s worth of new metal to sift through. But looks can be deceiving. This is a moving collection of classic rock-inspired tracks helmed by brothers Zane and Reeve Carney. Reeve’s vocals are expansive and varied — going from a low bluesy rasp to an all-out falsetto, he is a veritable force of nature. This far-reaching voice earned Reeve the role of Peter Parker in the Broadway interpretation of “Spider-Man” (with Bono and The Edge writing the music), which opens later this year. Once you get past the incendiary opener “Love Me Chase Me,” the album mellows out with Zane’s subtle, inspiring guitar complementing Reeve’s voice flawlessly.