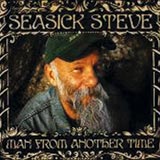 When I first heard one of Steve’s earlier albums, it seemed similar to a lot of minimalist (i.e., mumbling) folk-blues. Listening closer — something you have to do with the cagey Steven Wold, who picks his moments carefully — brings out his wizened, spry, ornery and humble sides. Still, some of what he records is too minimal to be considered a song, and yet he’s sold boatloads in Europe. His new record shambles closer to big, scrappy noise (a couple of tracks compare with ZZ Top), and Steve once more shows he’s more than the sum of his record’s parts, despite highlighting instrumentation handmade from hardware-store scraps. There’s remarkable precision on display here. His stuff is rustic, but it isn’t greasy. The man and his occasional drummer cohort are having fun as a novelty act that can often summon the goods. Seasick Steve is making up for decades as a wandering musical gadfly (friend to both Janis Joplin and Kurt Cobain; producer of Modest Mouse’s first records) in a big way.