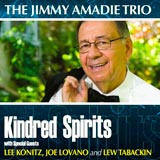 Acclaimed jazz saxophonists Lee Konitz, Joe Lovano and Lew Tabackin share the same instrument, and they all appear on pianist Jimmy Amadie’s latest release. Amadie’s career began in the 1950s, before he was derailed by severe tendonitis. With medical advances, he has returned to playing and released six other albums since 1995. Kindred Spirits might well be retitled Buoyant Spirits, as Amadie’s playing virtually embodies his positive outlook. Amadie composed five songs, including the only ballad, “Life Is Worth Living.” The remaining tunes are all upbeat, both rhythmically and emotionally. Konitz shines on the leader’s “Lee Bossa/Lee Swing” and the standard “I Want To Be Happy.” Another jaunty original, “Blues for Thee ‘DV’,” allows Tabackin to showcase his too-seldom-heard flute artistry. Amadie’s arrangement of Thelonious Monk’s “Well You Needn’t” offers an alternate perspective on this jazz classic, with a long piano solo. Amadie’s back-story is inspiring; this new release affirms his talents.