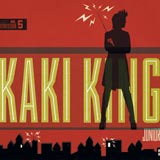 Rolling Stone declared Kaki King a guitar god, and Foo Fighters and Tegan & Sara have employed her brand of guitar-slapping and finger-picking to spruce up their albums. Her solo work has rested mainly on her instrumental skills, evidenced by her contributions to the soundtrack for “Into the Wild.” Junior reveals she still lacks a signature as a complete singer-songwriter. On songs with lyrics, I wished for more instrumental action, and on the moody instrumentals, I begged for singing to break up the linear monotony. “Spit it Back in My Mouth” is generic dance-pop set to a pretty arpeggio, followed by a repetitive instrumental in “Everything has an End, Even Sadness.” “Death Head” is a punkish Cranberries piece, followed by a dull instrumental, “Sloan Shore.” King ultimately fails to establish a solid footing in any genre with tired lyrics and singing somewhere between a sleepy Cat Power and a bored Liz Phair.