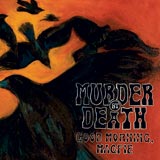 This record might sound too much like the past two, but that’s not a strike against MBD. I understand where the sentiment comes from. This band is previously known for changing styles song to song (while maintaining a remarkable singularity), so critics think they’ve become one-dimensional. Actually, they’ve chosen a single genre with which to play, and it’s one most suited to them. On Good Morning, Magpie, they ride their dark alt-country horse to new heights, even landing on some absolutely joyous moments. The songwriting is still sharper than a snap from a wet towel, something attractive on a loose-and-dirty band. Make sure to listen to “King of the Gutters, Prince of the Dogs” to hear the magic of what is a necessary song, one that needed to be written and was waiting for the right band to pick it up and present it.