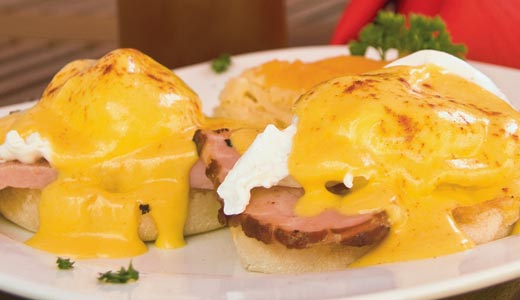 Early in April, Michele Brinke took over as owner of the restaurant in the Goss Avenue Antique Mall, renaming it from Olivia’s to Michele’s On Goss. Chef Travis Hall moved on to focus on his school nutrition business, and Brinke is now joined by Sous Chef Philip Hess.

Brinke, who among other things joined her husband, Bob, as co-chef of the short-lived but excellent Chef’s Table in Old Louisville and worked at Highland Fish Market in Middletown, brings plenty of experience to this sizable space. She already has put her stamp on the menu and the service at this lunch and brunch-only eatery.

The Goss Avenue Antique Mall opened in a property adjacent to the old Louisville Antique Mall after its predecessor moved to East Broadway and its long-term lunch spot, The Café, moved to 712 Brent St., where it continues to thrive.

I still miss the sunny, high-ceiling venue that housed The Café, with its splendid view over Schnitzelburg through its tall windows. The new room is stylish, too, but the large interior space loses the windows and the view. (A smaller back room has a row of windows, but the main room depends on artificial light — well-placed track lighting and impressive old fixtures.)

Comfortable, black leather chairs that look like they might have come from a men’s club surround round wood tables decorated with pretty bluish-green glass vases and pink carnations.

Like many of the city’s popular lunch spots, Michele’s midday menu focuses on soups, salads and sandwiches, with a few more expansive entrees.

A dozen sandwiches, categorized as “classic” and “hot,” range in price from $5.95 (for a BLT) to $10.25 (for a chicken cordon bleu sandwich or rib eye steak sandwich with provolone cheese and horseradish sauce on a grilled hoagie roll). A trio of tempting “Specialties” are $11.25 (for Michele’s Hot Brown) to $13.25 (for a pair of crab cakes). Soups — creamy tomato dill or a soup of the day — are $4.25 for a cup, $5.75 for a bowl. Salads are $6.95 for the house salad, $10.25 for a dinner-size chef’s or roasted chicken salad. Combos ($9.25) allow you to build your choice of two items from cup of soup, fruit cup, small salad and half of either tuna or chicken salad, ham, turkey or Benedictine sandwich.

We began a midday repast with mushroom soup ($4.25), an intense mushroom-flavored broth with big chunks of mushroom swimming in the bowl.

The Benedictine and bacon sandwich ($7.50) was built on dark rye. The creamy pale-green cucumber and cream-cheese mix was combined with sliced fresh cucumber for texture.

An offbeat but delicious sweet potato and roasted fennel salad made an unusual and tasty treat, with a dash of cayenne to provide a subtle kick.

The Cuban sandwich ($8.75) was heavy on the mayo for a Cuban, but the flavors were good: white cheese, ham and pork, pickles, lettuce and tomato, all on a chewy-crust ciabatta-style roll. The red-potato salad was fine, made in bite-size chunks with a rich sour-cream dressing.

Chocolate bread pudding ($4.75) made a nice finish: chocolate bread baked in a pudding with pecans, decorated with an artsy drizzle of caramel sauce and a dollop of whipped cream with a sprig of mint.

The weekday menu switches over to a brunch/lunch menu on Saturdays and a brunch buffet on Sundays.

The chicken a la rein crepe ($10.75) appears to be slightly fractured French for, um, Chicken a la King. Or Queen? Regardless, it’s a filling and flavorful weekend treat. A light, eggy crepe was folded over in the bottom of a shallow bowl, covered in a heavy blanket of creamy sauce that cloaks bites of tender chicken meat and bits of mushroom.

The salad looked good, with sliced cucumbers, red onion shreds, halved grape tomatoes, crispy croutons and spring lettuce mix, but the kitchen forgot to pick over the lettuce. I know it comes in a bag that says “washed,” but any good chef — and I know Michele is one — knows to rinse it anyway, and discreetly discard any slimy black bits. My wife found several lying in wait in her salad.

I chose the traditional ham over the smoked salmon, beef and seafood options for my eggs Benedict ($9.95). Two poached eggs, neatly trimmed into circles (cooked medium rather than my requested soft), were each placed on a square of Kentucky ham on halves of a toasted English muffin, then all coated with plenty of rich, golden hollandaise sauce. A side of cheese grits was good and cheesy, with additional yellow American grated on top.