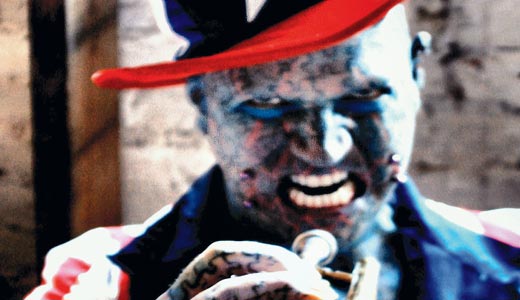 The Enigma’s shows have been known to involve swallowing long-tube lightbulbs, electrocution. He’s appeared on “X-Files” and “Ripley’s Believe It Or Not.”

At The Alley Theater this weekend, it’s all about hair hanging, belly dancing, lightbulb swallowing and scrap-metal compositions. Now in its third year, Freaks of July Dark Arts Festival is establishing itself as the place where vaudeville stretches to literal and figurative extremes.

This year’s show features The Showdevils, a collaboration between The Enigma and Serena Rose. With horn implants in his skull and a full-body, jigsaw-puzzle tattoo —“the backside of a puzzle; the art is on the inside,” he says — Enigma’s show has used power tools, swords and even electrocution. Born Paul Lawrence, Enigma founded Jim Rose Circus, which performed on the 1992 Lollapalooza tour, and he’s appeared on episodes of “The X-Files” and “Ripley’s Believe It or Not.”

His act with Rose will include placing apples into their mouths and cutting them with chainsaws, as well as a segment where he swallows a long-tube fluorescent light bulb.

It doesn’t stop there: Luna Circus includes a man suspending himself from his hair and having a crane lift him to the ceiling. Noiseman433 makes precisely that: noise. Originally a classically trained cellist, he uses effect pedals and pieces of scrap metal for his experimental exhibition. This year he joins DJ Leprekon as he does performance painting.

Next to all this, the scheduled music performances practically sound tame: Vampire Squid, Absence of Faith and il Troubadore, the self-described “16th century rock band from Indianapolis,” whose repertoire encompasses more than 20 languages. Belly dancers Zahara, Taletha, Amairah, Asharah and Donna Mejia round out the bill.

Last year’s Freaks of July drew more than 100 people, and organizer Jeremy Adkins is hoping the show’s relocation to The Alley Theater and the Goth crowd’s combined efforts with belly dancers adds depth.

“My philosophy for bringing these events is to expose people to different backgrounds, to art they may have never seen before,” he says.