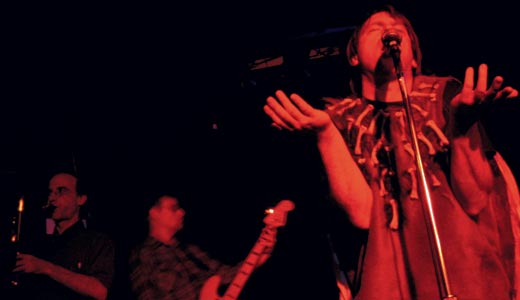 Take the title of The Web’s newest album, Clydotorous Scrotodhendron: “It’s actually a fanciful plant that I invented in the course of working on a story,” says Hoyle, a onetime Louisvillian who practices disability law in the Bronx. “There’s a number of phrases and titles and characters that show up in the record.”

That plant is the central figure in CS’ multiple meandering narratives. “Various characters are seeking it in various places, various times,” Hoyle says. “One character is looking for the plant in the setting to draw an elixir out of its roots for medicinal purposes. Another character is looking for a piece of the plant to provide a clue for the identity of a criminal aboard a spaceship. There’s a variety of these storylines.”

Mentions of one Lt. Col. Minuteman and red-tailed hawks are enough to send The Hold Steady’s Craig Finn back to the notepad, to say nothing of Hoyle’s passion for costumes: He and wife Anne Peabody, a professional seamstress, or “sculptress,” collected grass, shrubs and parts of trees to make the suit he wore onstage at a benefit show for Jason Noble at the 930 Listening Room last November. When The Web opened for Pere Ubu, Hoyle sketched a tunic, and Peabody brought it to life using real feathers and chicken bones.

Originally recorded at Falk Studios here in 1998, as well as a friend’s basement and mastered at Salt Studios in Green Point Brooklyn, the follow-up to Fruit Bat Republic took years and spread over multiple states, much like the band’s lineup: The Web is spread north and south of the Mason Dixon — Jason Hayden (Sunspring, Crain, VRKTM, among others), lives here, as does Steve Good. Hoyle has called New York home since 2001, and engineer/mixer Andy Willis, who has worked on movie soundtracks for years, resides in Boston.

In 2004, Willis sent Hoyle a mix of one song, “Janitor Grass,” and from there, completion on the rest of what would become CS. “What we’re trying to do with this record is to try to present our sound as cleanly as we can,” Hoyle says.