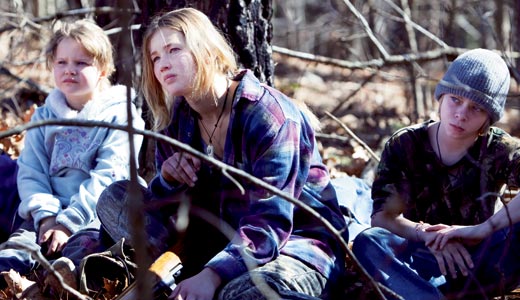 The engine that makes “Winter’s Bone” go is a breakout performance by an alluring, Louisville native, whose beauty never distracts from the film’s sense of real — Jennifer Lawrence as Ree Dolly. This is important, because the success of “Winter’s Bone” may hinge on its genuineness. The story is set in a worn and weathered section of the Ozarks and is populated by an escalation of nogoodniks who become more threatening with each walk-on. In a world where a teenager’s choice of employment is meth or the military, it’s Lawrence’s poise and grit that allow her to achieve believability. She is never out of place among the film’s long, squinty stare-downs, its cryptic tattoos and fingernails that seem filthier with each passing scene.

Lawrence plays an impoverished 17-year-old who, while teaching her younger siblings how to live off the land — that is, hunt squirrels — must also track down a missing father who’s signed their homestead over to the bondsman. Ree’s hopes of saving her property dim as her father’s court date approaches with no sign of him. Her hunt is thrown into further disarray when the meth-world players who can help Ree locate her dad go from reticent to severely pissed off.

Lawrence is well directed by Debra Granik and helped along by a stellar supporting cast. These actors strike a balance between authentic, mountain roughness and refined, nuanced performance. The great country faces of John Hawkes and Dale Dickey lend an element of truth to the project (as does Dickey’s east Tennessee upbringing). But both actors do far more than just look the part. One of the joys of “Winter’s Bone” is never knowing for certain what its characters are capable of — who’s a real threat to Ree and who may be able to help her? This brings about some unexpected reversals and surprising allegiances — story elements that might have been tipped off by a less skilled group of actors.

At times cold and deliberate, when it fires correctly, “Winter’s Bone” is as tense and taut as the best thriller. Though it doesn’t fall neatly into any genre, this film often evokes those most unsettling cinematic experiences where a filmmaker resists showing us the monster, thereby better engaging our imaginations. Much in the way the shark in “Jaws” receives so little screen time, or how we never actually see Norman’s knife hit Marion Crane in that famous shower scene, there’s a suggestion of danger in this film that far exceeds its on-screen violence. This is of particular value when watching Ree wander into territory she’s already been warned about.

After closing the recent Flyover Film Festival, “Winter’s Bone” embarked on its theatrical run Friday and will screen locally at Baxter Avenue Theatres. Granik’s adaptation of the Daniel Woodrell novel adds itself to a slowly growing batch of female-directed films that feature complex, female protagonists and locations not typically used as movie settings. “Wendy and Lucy” and “Frozen River” both come to mind, but “Winter’s Bone” may be the best of this group.