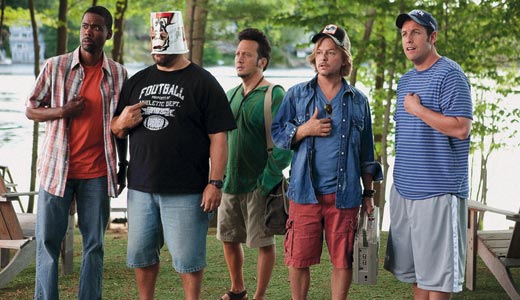 “Why are we doing this?” asks David Spade in the new summer comedy “Grown Ups.” The question could apply to several choices made by the filmmakers, and even to those of us who elected to sit in the audience. In this instance, the why is posed to Spade’s four counterparts, grown men who have just launched an arrow straight up into the air. They are waiting for it to come down in order to determine, of course, who will be the last among them to run out of harm’s way. This may resemble a dangerous and amusing set up, but the scene doesn’t quite play out that way. This is even truer when the gag is repeated later in the film and its victim gets hit in the same body part as his predecessor.

The physical comedy in “Grown Ups” can be watchable but often suffers from a stutter. Central to the film’s trailer is a bit where Kevin James takes an unfortunate turn on a rope swing, forgetting to drop into a lake and crashing violently into the hillside. We are offered a similar replay of this later, except to keep things fresh, the lake is changed to a pool, the rope is a zip line, and the hillside is a shed. Recurring humor can be an effective device, but it would seem the joke should be funny the first time.

The cast represents something of a comedic supergroup. In addition to Spade and James, Adam Sandler, Chris Rock and Rob Schneider make up the movie’s core. As we’ve learned from rock music, supergroups can be hit or miss. There are those who produce work that eclipses their earlier stuff, like Cream, but more often, there’s that other kind. Let’s just say, Sandler’s gang is not Cream.

Chemistry is part of the problem. The five men play childhood friends who have not seen each other in decades, so perhaps some awkwardness is intended. But “Grown Ups” achieves the wrong kind of awkward. It feels at times like its five leading men are being careful not to step on toes. Cast members seem self-conscious when they’re supposed to be ruthlessly busting one another’s balls. When this much talent meets, clever volleys and verbal one-up-manship are to be expected, but in this case, we never really find out who’s the funniest guy in the room.

It would not be unfair to issue a bad review of this flat, bloated and saccharine PG-13 comedy without mentioning the snickering teenagers in the Baxter Avenue audience last Friday. It is generous to include that as the credits rolled, one enthusiastic youngster turned to his mother and said, “That was funny!” There are 50 reasons not to waste your hard-earned money on this movie, but it’s difficult to argue with a delighted youngster on summer vacation. So too is a $40 million box office. Do consider, though, as more and more people saw “Grown Ups” this weekend, its rating on Rotten Tomatoes, a website that gathers film reviews, dropped into the single digits (that is, a score of 9 out of a possible 100).