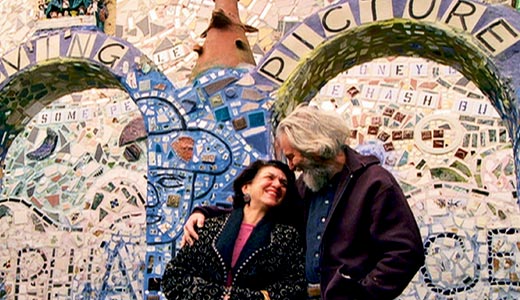 Shortly after a breakdown that included suicide attempts and genital amputation, Philadelphia street artist Isaiah Zagar discovered a talent for mosaic making. As if trying to reassemble his life’s million little pieces, Zagar worked fragments of broken glass, crockery and mirror into wildly vivid murals. Four decades later, his work — which tends to depict his family — covers an estimated 50,000 square feet of south Philly walls and alleyways, in some cases enveloping entire buildings like unchecked ivy.

The feature-length documentary “In a Dream” tells the story of Zagar’s career and the turbulent family dramas that accompany it. The film was produced by the mosaicist’s son, Jeremiah Zagar. As a microgenre, the mom-and-pop doc can yield unspectacular accounts of quotidian households, but this is not the case here. For starters, Jeremiah’s parents make for irresistible subjects. Julia, a gifted storyteller and chronicler of their history, accurately sums up her marriage this way, “I was his reality base, and he was my bird.”

Even before day one of shooting, the filmmaker had a wealth of colorful, 1960s and ’70s home movies to draw from. These feature his parents, then a couple of hippies, slowly turning around their rough neighborhood. The Zagars would purchase distressed buildings, adorn them with mosaic and then find renters to occupy them. Jeremiah, a fluent filmmaker with a knack for narrative, made good use of this found footage. The old Super 8 runs fluidly with his present-day interviews, scenes of his father working and animated clips of Isaiah’s drawings. This cohesion is achieved, in part, by a strong soundtrack that strikes just the right mood.

Storywise, Jeremiah had good fortune — albeit, at the detriment of his family — when a succession of devastating crises hit the Zagars over the course of shooting. The filmmaker has said he hated himself for running a camera on some of this stuff, but the result is a naked, unflinching look at how mental illness, drug use, work addiction and infidelity wear on the family bond. We witness a great love bend, threatening to snap at any moment, and a mad artist who wanders into a psychological wilderness with a dimming hope for return.

A repeated festival winner, the project was first suggested by the family matriarch, Julia, who wanted a record of her husband’s artistic legacy. But when a frank back-story of sexual molestation and mental illness are revealed to Jeremiah, the filmmaker knew he was getting into more than he bargained for. It would take him seven years to complete the project.