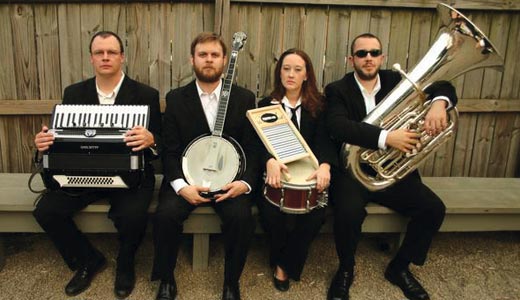 Old-time harmonies take center stage next week when Evie Ladin drops in. The San Francisco singer is a member of The Stairwell Sisters, who have performed at Chicago’s Old Town School of Folk Music, Garrison Keillor’s “A Prairie Home Companion,” and New York’s Lincoln Center, among others. Ladin’s set will mix originals and traditional songs, and it happens Tuesday at Steilberg String Instruments (4029 Bardstown Road, 491-2337). The singing workshop runs 6-7 p.m. and is $10, and the concert starts at 7:30 p.m., also $10.

Paul K.’s ‘Wilderness’
“A Wilderness of Mirrors” is the title of the forthcoming documentary on Paul Kopasz, longtime musician who fronts Paul K. & the Weathermen. Produced by J. Denison Holmes, Julia Price and Emily Kowalcyzk, and edited by Kopasz’s longtime friend and former sideman John Bosch, the doc contains more than 100 hours of footage dating back to 1982. “We’ve been friends since I was 18, and I realized he was a unique character. Being my friend, he opened up to me about his philosophies,” says Bosch, who hopes to finish it by October.

Lucas, Cecil & Lilith
Amanda Lucas and Audrey Cecil perform at 2:30 p.m. July 20 at Lilith Fair when it stops at Verizon Wireless Music Center in Indianapolis. Lucas won a contest that landed her the gig. Cecil and Lucas perform at 3 p.m. July 3 at the Crescent Hill Arts & Music Festival, and Cecil will play again that night at 7 p.m. as part of Kentucky Homefront. Lucas’ debut, Half Empty, is out now, and new tour dates are up at myspace.com/amandalucasmusic. Cecil’s self-titled CD is out now, and more information is there at audreycecil.com. The duo’s new website, alac-music.com, goes live July 6.

Butchertown Pub reopens
Butchertown Pub has once again opened its historic doors, but it’s not quite what you think. It hasn’t been Butchertown Pub for many years, as bars, clubs and coffee shops have made their way in and out of the notable fixture. Now, it will operate as a music studio, production studio and venue that can hold 200 people. As a tip of the hat to the past, the name will stand. Masterminds behind the revitalization are Marion Square alum Brian Goodwin, former Label X owner Todd Smith and Chris Witzke. “We hope we’re a forward-thinking facility that’s wired toward where media is headed and not where it’s been,” Smith says. This time, its new owners hope to be permanent tenants.

Music Cast
Sundays + Nachbar = Squeeze-bot. The troupe (myspace.com/squeezebot) joins us in the LEO offices to talk about the weekly gig and share tunes from their album. Listen at Bluegrass Catastrophe, bluecat.leoweekly.com.