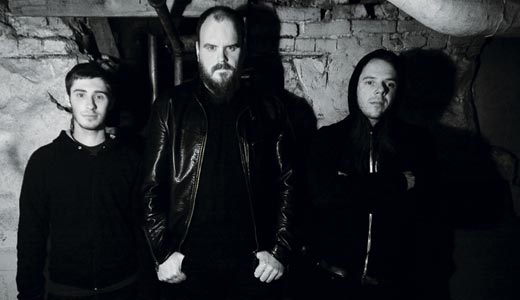 On their forthcoming album, House with a Curse, Coliseum sheds many of the loud, fast rules found on No Salvation and opts for depth. Singer and guitarist Ryan Patterson is still leveling a few demands at the world around him, only this time his lyrics are more introspective, universal and ambiguous. Myriad guests — including J. Robbins (Jawbox, Channels), Will Oldham, Peter Searcy, Jason Noble and Patterson’s former piano teacher, Brigid Kaelin — make House double as an homage to Louisville’s independent roots. House arrives June 22 via Temporary Residence.

LEO: What happened with Relapse (who released No Salvation)?
Ryan Patterson: Nothing major really. It’s kind of a symptom of what’s going on in the music industry: band spending a lot of money to record, record sales going down. Relapse had to reevaluate things, and we signed for more money than we needed. We recorded our first record (God Damage) for $800 in our garage with Jason Loewenstein (Sebadoh). A few years later, somebody offers you multiple thousands of dollars: ‘OK, sure, we’ll take it.’ A few years later, that kind of money isn’t there anymore. It was an amicable split, and they still wanted to do a new record. We did three years of constant touring, did some tours that were fun and great, and we met good people, but we were part of this metal music industry touring circuit. We were starting to feel like we were part of this thing that we never really wanted to be a part of. Jeremy (Devine, of Temporary Residence) has a massive involvement with my brother (Evan Patterson of Young Widows), and he’s an awesome dude who runs this label that means something to me. It seemed like where I wanted to be as a band rather than this other world we didn’t fit into, but we tried.

LEO: The differences in House With a Curse are immediate — from the first song, even. What led to the change in approach this time around?
RP: With No Salvation, I love it, of course. There are hits and misses, things that worked really well. But I realize that we never really wanted to be a “fast” band — that wasn’t in our mission statement when we started, it just developed that way. Looking back on it, it wasn’t an issue of (speed). I wanted to write new songs in a different way. I feel like there are a million bands that come out of hardcore and punk and just turn their back on what they’re all about. It happens today. I really detest that. We’re the same as we ever were; it’s just a new batch of songs. The goal is hard-hitting, sincere songs that were catchy. Heavy bands can get to a point where you write like you’re putting together a jigsaw puzzle. I wanted the vocals to have a place in the song and room in the song, and not have a barrage of things going on.

LEO: There are a lot of guest musicians on this. What was the thinking behind that, and did you want them to be all from Louisville?
RP: They are not from all Louisville. River City Tanlines are from Memphis and J. Robbins is from D.C. The record is the first time we’ve recorded an album in Louisville since our first record, and I wanted it to be a Louisville record. I felt like it was more insular in general, more of a Louisville kind of vibe. We’d call up people. I could’ve made a list of 100 people. The list of awesome Louisville people is never-ending.

LEO: Who is the kid’s voice?
RP: Oliver Cox. He’s the son of my buddy Kelly Cox (Shirt Killer, Initial Records). We see each other and talk to each other almost every day. We’re like family: They and my brother were the only people at my wedding. I’ve known Oliver since he was born, sitting in my lap and playing on the computer. Later on he got into comics, “Godzilla,” Kung Fu movies, and he also takes piano lessons from Brigid Kaelin. He would play and sing along to Elliott Smith records. It’s weird to say one of your friends is 8 years old (laughs).

LEO: What do the initials R.S.H. and V.C. stand for?
RP: Roland S. Howard (deceased former guitarist of The Birthday Party, Crime & the City Solution). He was the guitarist of Boys Next Door — his band with Nick Cave. Every eulogy is former Nick Cave sideman, but this guy is a great artist in his own right. The quote is from a song called “Shivers.” That whole song is the futility of the musical dream. V.C. is Vic Chestnutt. I never really listened to Vic’s stuff, but I checked it out. “At The Cut” is truly one of the most unbelievable songs.