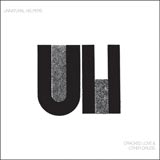 Is heady, dirty punk over already? In less time than it takes to make Hamburger Helper, Unnatural Helpers cobble together 15 songs in a half hour. In that time, though, drummer-frontman Dean Whitmore is contradictory and playfully jaded. His bandmates join him to deliver damn good straightforward rock, modifying an amped-up rendition of The Strokes or a modernized MC5. The collection of 100-second songs will leave many listeners wanting more of each, and the album is probably intended to come across better live. “I Don’t Belong to You” and “She Was Your Girlfriend” end as quickly as they arrive but make their presence felt. Muddy, fuzzy riffs from dual guitars percolate into a sour-mash rhythm that politely borrows from The Meat Puppets and Mudhoney. “Sunshine / Pretty Girls” focuses on Whitmore’s lyrical indifference for either subject. In it, a gleeful-yet-sarcastic hook infects happy ears, polishing up the likely single. Despite the good music, time is money. Unfortunately there only is enough here to cash in for a six-pack.