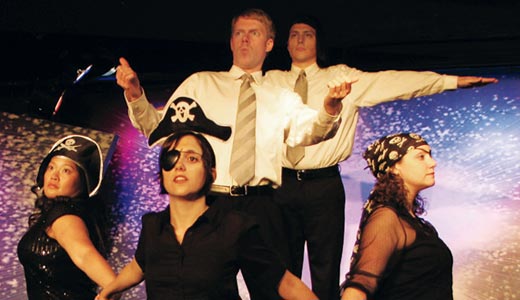 Not too easy, is it?

The Second City has practiced the sorcery of improvisational comedy for almost half a century. When their troupes (there are now three incarnations of the Chicago original) take the stage, expectations flee for safety as they channel a singular blend of childlike inventiveness and preternatural timing. Now celebrating its 50th year of groundbreaking performance, The Second City is coming to Louisville, tongues blazing, as part of LEO’s “A Little Off Center” series.

Created by University of Chicago undergrads in 1950, the group (originally known as the Compass Players) went on to open the Second City Theatre in Chicago’s Old Town neighborhood in 1959. Since then, they have expanded to Toronto and Los Angeles. The troupe’s name is an acerbic nod to a 1952 New Yorker article about Chicago, titled “The Second City.”

They should be well known to fans of the Chicago theater scene, the long-defunct (but essential) Canadian TV program “SCTV” or even the juggernaut that is “Saturday Night Live.” In fact, The Second City’s training program seems to operate like an NBC turnstile.

The troupe’s alumni list reads like a who’s-who of comic treasures: Alan Alda, John and Jim Belushi, John Candy, Chris Farley, Mike Myers, Martin Short, Catherine O’Hara, Jon Favreau, Steve Carell, Stephen Colbert, Amy Sedaris and Tina Fey have all trained under the group’s tutelage. One of the brightest stars to emerge from The Second City was the late Gilda Radner, whose talents graced “SNL” in its brilliant ’70s golden age. When she died in 1989 at age 42 as a result of ovarian cancer, it came as a shock to everyone who loved her (that is, everyone who ever saw her do anything at all). A portion of ticket sales from this performance will benefit Gilda’s Club, which promotes nationwide cancer awareness and education.

The Second City’s performances should be a hit with anyone not averse to laughter. Their style of comedy has evolved over time (“Those Eisenhower jokes just don’t go over like they used to,” their website declares), but the format is the same. The shows feature improvised and scripted scenes, but the real fun comes during the second act when they invite the audience to suggest scenes, plots and characters. And like high-wire daredevils, they deliver. What sets The Second City apart from countless other improvisational comedy groups is their unwavering and boundless creativity.

The “50th Anniversary Show” features a selection of classic Second City skits written by some of its most famous luminaries, as well as material created by its new generation of rising talents. Giving an overview of the tour, the website states, “It’s our job to laugh at what scares us; to make the unfunny funny; and to provide audiences with a chance to let go for a couple hours and just laugh.”