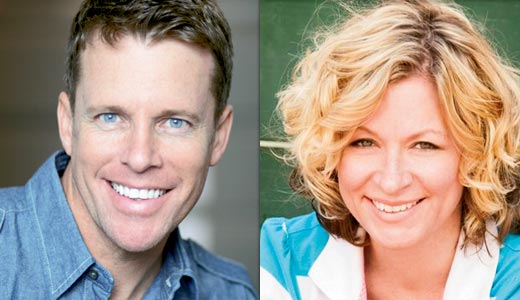 Five nights a week, Chris Franjola and Sarah Colonna write and regularly contribute to the roundtable on E!’s “Chelsea Lately.” On weekends, they perform all over the country opening for their comic ringleader, Chelsea Handler, or on the Comedians of Chelsea Lately Tour, or headlining their own shows in clubs from coast to coast. This weekend, Franjola and Colonna are co-headlining at The Improv.

LEO: How important is it for you as a comic to be on the road?
Sarah Colonna: It’s important, especially in Los Angeles, because you don’t get the opportunity to do a lot of time here until you’re really established. On the road, you get to go to all of these cities and meet all of these people — it only enhances your material.
Chris Franjola: Working on a show every day, it’s hard for me to get out on the road, but I love it when I can. I mean, we get out a lot, but I’m not out as much as some. I have friends who are out a ton, but I guess it’s important for them to get their name out there.

LEO: Do you prefer playing clubs or theaters?
CF: For theaters, you kinda have to change your act a little bit — you have to be a little higher-energy. I mean, the material is still the same; you just have to reach the back of the room. In clubs, it’s nice — it can be more intimate, you can do a little less and get a little more.
SC: In a club, they may not know you, they just want to laugh. At a theater, they’re coming only because they know you from the show … which is a great thing in itself. But the clubs offer more excitement around stand-up, while theaters offer more excitement around “Chelsea Lately.”

LEO: Chelsea & Co. seem to be the biggest thing in comedy right now. Why do you think that is?
CF: I think it’s because we’re all friends, which is nice. I think that shows. We also have a pretty rabid fanbase of people who know everything we say and watch every night, and they like the fact that we seem like a strange, bizarre family.
SC: It’s almost like you’re watching a cast instead of a bunch of people sitting around a table together. I think she established a family to watch — it’s a fucked-up family, but it’s entertaining.

LEO: You all did “Topless Roundtables” on the show. Are there any lines you wouldn’t cross for a laugh?
SC: Umm … yes, I don’t know what they are yet, but I’m sure I’ll know when they’re asked of me. I’ll never do a pantless roundtable … it’s just too cold in the studio.

LEO: How long have you all known each other?
CF: Shit, like 15 years. I actually met Chelsea and Sarah on the same day. They were doing a comedy show, and afterward, we went out for some drinks … it was Cinco de Mayo. I still remember the day.
SC: Yeah, it was Cinco de Mayo because he wanted to go meet this girl who was my roommate … and then later that night he finger-blasted her on the couch. That’s how I met him … he did that to my roommate.

LEO: Presumably you didn’t shake his hand after that.
SC: No, I didn’t … I still haven’t.

LEO: Are your escapades with groupies on the road as bad as Chelsea makes them out to be?
CF: Yeah, that’s the one thing bad about traveling or touring with Chelsea — everything you do or say is on the show within the next week, which is great and not great at the same time. I’m one of the only single guys on the show, so when I go out on the road, they like to live vicariously through me … that’s what I think, or that’s what I tell myself anyway. It’s not as bad as Chelsea makes it out to be, but it’s a good time.

LEO: Are Chris’ escapades with groupies on the road as bad as Chelsea makes them out to be?
SC: Oh, they’re just as bad, if not worse. I think we tame them for the show so as not to get in too much trouble. Yeah, it’s worse than you can imagine — I’ve seen it all firsthand … it’s not pretty.