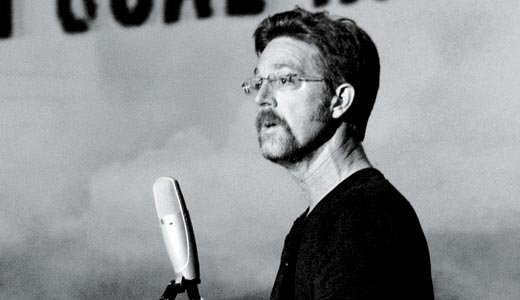 Reckoning at Eagle Creek: The Secret Legacy of Coal in the Heartland
By Jeff Biggers. Nation Books; 320 pgs., $26.95.

If you take away anything from the work of playwright, journalist, historian and activist Jeff Biggers, it should be this: There’s no such thing as clean coal.

He is not merely talking about coal from a scientific perspective, although he’s obviously doubtful of the coal industry’s claims that they can mitigate the release of chemicals that cause climate change and acid rain.

No, he’s also talking about the impact on the people who actually live in the areas that produce coal: The impact of coal in general, and the impact strip-mining in particular has had on the people of the Appalachians, Wyoming and Biggers’ native state of Illinois. His word for it is “historicide” — the knowing destruction of the history of a people and a place — and the fight against historicide is central to his work.

In other words, it’s hard to be a clean energy when your industry’s hands are so dirty.

In his new cultural history/memoir/activist treatise, “Reckoning at Eagle Creek,” Biggers recounts the moment in 1999 when he found out exactly how dirty the coal industry was. He and his mother go out to the part of town that used to be his family home, which was now a barren moonscape. The topsoil — referred to by coal companies as “overburden” — had included 200 years of his family’s history.

But the tragedy touched more than just his family. The land had “a thousand years of bones of the first natives in the region, the modern Shawnee encampments and farms, the pioneering squatters and homesteaders in our family, the slaves and coal miners in one of the first settlements in the nation’s heartland — all of which had been churned into dust in the race to strip-mine the area.”

In an interview with Biggers, he explains that this was a transformative moment for him. He had been deeply involved in these issues in Appalachia and had written a well-received history, “The United States of Appalachia: How Southern Mountaineers Brought Independence, Culture, and Enlightenment to America.” The book celebrates the culture and innovation of the region. He hadn’t thought that much of his own part of Southern Illinois — a rugged, mountainous region at the tail end of the Ozarks — would have been touched. Like Appalachia, it is coal country. And also like Appalachia, its culture and people are much maligned.

“I had studied everybody else’s culture but mine,” he says. “And it forced me to ask questions: What is my history, and why it is important? What does it mean when somebody kills your history?”

“Reckoning at Eagle Creek” is meant to answer some of these questions. He traces the early settlement of his region by Native Americans and eventual incursions by the French and English. Then came land speculators. Eventually, settlers and slaves arrived. There was always the draw of minerals below the surface that created conflict between people who needed the woodland and those who wanted what was below it.

Illinois has America’s oldest coal industry, which brings the good — a vibrant “coal culture,” pride in providing an invaluable resource for industrializing America — and the bad — black lung, mine accidents, labor unrest, the utter dominance of a single industry.

Illinois has been strip-mining for a 150 years, according to Biggers. But only recently has the true devastation of modern, industrial-scale mountaintop removal come to his ancestral home.

There is a qualitative difference for mountaintop removal, he maintains. Underground mining is dangerous and usually exploitive, but he has coal miners in his family history, and he can see it has some ambivalence. Strip-mining is different.

“Strip-mining is a crime against nature and humanity — a historical crime,” Biggers says. “Mountaintop removal is a human rights issue.”

If it’s so obviously wrong, why don’t people care?

Part of the problem is that these rural, mountainous communities that experience strip-mining are frequently seen as backward places, filled with hillbillies, moonshiners and extras from “Deliverance.” This is a perception Biggers vigorously rejects.

“These were pivotal places toward the American dream,” he says. “This isn’t the backwoods. This is the frontier. Realize that you have to look at it in a different way.”

As evidence, he frequently cites the people and movements that have emerged from Southern Illinois and Appalachia as proof of the innovation of these regions: miner unions, Mother Jones, vibrant anti-slavery movements, writers, musicians, actors, thinkers. They can all be claimed by Appalachia and Southern Illinois.

Sadly, this is exactly the history that is being destroyed. Challenging these misconceptions will be all the more difficult when the communities have been replaced with whatever dubious mine reclamation projects move in.

When I ask for an alternative economic foundation for these regions, he talks about a slow, pro-miner transition toward renewable energy. But still, he reminds me that mountaintop removal “is a crime.”

“It doesn’t need a solution,” Biggers says. “It needs to be stopped. If somebody is raping your mother, you don’t say, ‘Can we find a way for him to express himself?’”

Jeff Biggers appears on KET’s “One to One” with Bill Goodman the week of June 20. His book, “Reckoning at Eagle Creek: The Secret Legacy of Coal in the Heartland” was published in January.