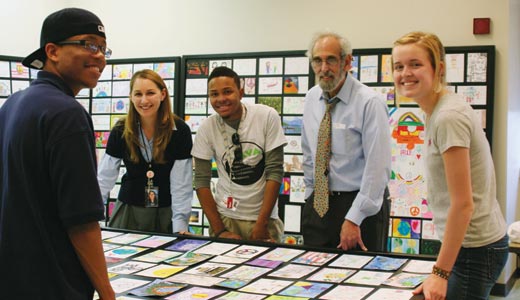 It all started around Christmas 2008, when Louisville attorney, peace activist and art collector Allan Weiss founded Peace Postcards. As he began to think about what peace really meant, he decided to hand out postcards to friends and family to gain a bit of insight into what those around him thought. Expecting to receive no more than 100 back, he was moved with the overwhelming response.

Whether it was through the website or word of mouth, the project continued to grow. Each person views peace in a different way, and that is what makes the Peace Postcards project, now up at the Muhammad Ali Center, such a moving display.

“To me, this was a simple way to get people to stop and think about peace,” says Weiss, who had received more than 7,000 postcards as of last week.

An avid actor in nonprofit peace efforts, Weiss began his work as an undergraduate at the University of Louisville working on housing issues in the 1960s. Today he continues those efforts while traveling and promoting the Peace Postcards project.

Initially, Weiss thought he would receive postcards with visions of world peace, but for many, the idea of peace is as close as their families, neighborhoods and cities.

Most of the postcards on display have come from young people in Canada, Germany, Costa Rica, Rwanda, Germany, Afghanistan, Denmark, Israel and the United States. Postcards are being distributed around the world to people of all ages in the hope that making a postcard will help everyone involved see and develop his or her own vision of peace.

“All of us have the responsibility to stop and heal the world,” Weiss says. And it seems there is no better place for the Peace Postcards exhibit to debut than the Ali Center.

Muhammad Ali was one of the most revered, fast-talking fighters in his time. But when his time in the ring came to a close, Ali focused on a greater deed. He began traveling the world, shedding light on issues like hunger, poverty, education and adoption. His most notable accomplishments have included his constant promotions for peace and understanding all over the world.

“Peace efforts have certainly been a major part of (Ali’s) work and interest for years,” Weiss says.

Today Weiss still receives phone calls and e-mails from people and groups around the world asking how they can be involved. Students from elementary to high school across the country continue to contribute their ideas of peace. As the project plans its official fall opening, Weiss is in talks to have the exhibit travel to the Dayton International Peace Museum and hopes to arrange a possible trip to Hiroshima for the future.

After seeing his project grow to this magnitude and receiving thousands of responses from around the world, Weiss still takes the time to read many of the postcards individually. Of the many he has seen, he recalls one that had a lasting effect on him.

“There have been many over the years,” he says. “But one in particular read, ‘Be a link in the chain of peace.’ It had a chain link on the postcard. I liked it so much, I created a postage stamp based on this postcard.”

The full Peace Postcards exhibit officially opens on Sept. 21, the International Day of Peace. Highly respected artists such as C.J. Pressma and Julius Friedman also will contribute to the project, which is still open to anyone who wishes to fill out a postcard. You can visit the Muhammad Ali Center and pick up a card or visit the Peace Postcards Project website (www.peacepostcards.org) to download a blank one. Show the world what you think peace looks like. Draw, paint, sketch, make a collage — just put your vision on display.