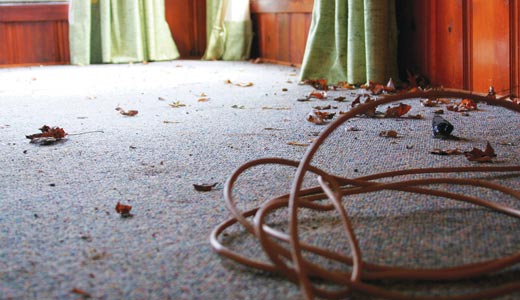 Among the specks of leaf and dirt on the worn carpet, in the refrigerator left full, behind the curtains ripped off the window now lying on the living room floor, foreclosed homes hold within their walls the story of the people who once dwelled. It’s clear how much some have lost when you look at what remains, and it’s this story photographer Phoenix Lindsey-Hall shares in her upcoming exhibit “Foreclosed: Pictures of What Was,” opening Friday at the Tim Faulkner Gallery.

After graduating from the Savannah College of Art and Design, Lindsey-Hall moved back to her native Louisville and landed in the nonprofit sector, working for both the Metropolitan Housing Coalition and The Center for Nonprofit Excellence. She says it was her professional pursuits that allowed her to work directly with people caught in the unrelenting tether of foreclosure. It was this, and through another organization called Making Connections, that Lindsey-Hall started to see her project unfold.

“I went and told people, ‘Hey, these are your legal rights.’ When I was having these conversations with people, I started to see what the project could be,” she says.

While on the job, Lindsey-Hall stumbled upon numbers that shed light on the crisis. Last year in Jefferson County, more than 3,000 foreclosures were filed. During the 2007-2008 school year, there were more than 8,500 homeless students enrolled in the Jefferson County Public Schools system. For the 2009-2010 school year, that number rose to 10,000. Looking at a map highlighting foreclosures, she noticed the dots were scattered — this was not only a housing issue, but also a case of rising suburban poverty.

“These aren’t new houses, they’re houses that have been lived in for years, and you can tell the people who used to live there just couldn’t do it anymore,” she says.

When she first started the project, she didn’t know what to expect, saying that like most art, having an overly defined vision before you begin hinders potential. So, armed with facts, ambition and a crowbar, Lindsey-Hall set out to photograph the homes.

She knew not getting formal permission to enter foreclosed properties was a risk, but she was willing to take it. “It was more trespassing than breaking and entering, even though I was definitely doing both. I really wanted to be respectful of the spaces.”

Entering the empty homes was an eerie experience at first. “The stale air just hits you, and you feel like you’re in a time capsule,” she says. “I would literally yell, ‘Is anyone home?’ because it looked like someone should be there.”

Her efforts amounted to a series of haunting photographs. The first thing you notice about the photos is the absence of people where people should be. “I wanted to use the domesticated spaces that people could identify with, instead of people who were already ostracized,” she explains.

Lindsey-Hall’s work is quite bold and arguably necessary given the dwindling conversation about a crisis many feel was yesterday’s problem. The unconventional approach lends salience to the matter by having what was left behind take the frame. She wants viewers to look at the pictures and put themselves in that position — to be startled when they see a picture of the same Tonka truck their kid plays with left behind in a foreclosed home. She wants the viewer to see a refrigerator brimming with decaying food and think of their refrigerator full of food they weren’t forced to abandon.

The printing and framing for the show was funded by a $2,500 artist enrichment grant from the Kentucky Foundation for Women. For the 28-year-old artist, the show is more than a great opportunity — it’s an illustration of the hardship and loss many people in Jefferson Country have endured. “I definitely want this body of work to continue to raise this issue, and I really wanted to make it personal,” she says.

Lindsey-Hall is enrolled at New York City’s Parsons New School of Design in a graduate program for photography. She says she has started working on another project — photographing places where hate crimes have occurred — using the same research technique she employed for her foreclosure exhibit. “I’m interested in the residual energy that’s left when something tragic or unusual happens in a space.”