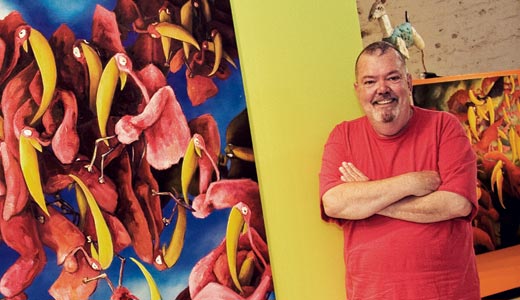 I was asked by LEO to reflect on the last 20 years of the Louisville visual arts scene. I imagine I was invited to this task because I was a part of this history as both witness and participant. Although the story goes back more than just 20 years — the scene really began to blossom starting in the ’70s and leading up to 1990 — this short history lesson will focus mainly on the past two decades.

To build and grow a strong arts community in a city, it takes a village, vision, free wine and trolleys, plus people willing to give it their all. For Louisville, there’s a list of essential, impassioned, tireless villagers that is long and strong.

While I can’t list them all in this space, a few include the Marlene Grissom Gallery, Martha White Gallery, Rita Steinberg of the Kentucky Art and Craft Foundation (KACF), Charlie Weisberg of Contemporary Crafts Gallery, Kathy Scherer and Lucy Merrit of Park Gallery, Rowland and Eleanor Bingham Miller, Mayor Dave Armstrong, and John Begley and the Louisville Visual Arts Association (LVAA). These people and institutions have nurtured Louisville’s art scene through its infancy and helped build the bedrock foundation upon which it is poised.

Now, to the last 20 years — back in 1990 when LEO first began, the essential guiding compass points for the visual arts in the city were: B. Deemer to the east, Swanson and J.B. Speed to the south, LVAA to the north, and KACF, Zephyr Gallery and Billy Hertz Studio (later to become Galerie Hertz in 1991) in the center. Sleeping homeless blocked the doors of all involved, and if tripping over the drowsing bodies in doorways didn’t get you, the gaping potholes on Frankfort Avenue would.

In 1993, Rita Steinberg and Julius Friedman spearheaded the first version of the Trolley Hop. The route was a total of three and a half blocks down Main Street from Sixth to Ninth. After that, Galerie Hertz joined, then Zephyr, then Swanson Cralle (now Swanson Reed) — and the rest is history. As the gallery scene expanded, more people came, then more galleries came, more restaurants, then again more people, then housing, then more galleries … which all add up to today’s vibrant art scene. I may have skipped over the negative hurdles, but I’m sure if you check with any of the above-mentioned people or your favorite downtown gallery, they would be more than happy to share their memories.

When the Trolley Hop first started, the galleries funded it completely. After it grew, the Louisville Downtown Management District and sponsors picked up most of the tab for the undertaking. It was an “art event,” and since its inception, it has continued to expand and become a real attraction incorporated by other neighborhoods as a way to attract more commerce to their respective areas. Interestingly enough, all of this was done with no help from the “tourism arm” of city government. It should also be noted that visual artists and galleries do not receive any money from the Fund for the Arts.

Today we have more than 40 galleries, studios and nonprofits, each adding a unique voice and dimension to the scene. The proliferation of galleries in a city this size is truly amazing. One reason I think the visual arts have flourished here is the cost of living — it costs less to live and work in Louisville than in other major cities, so the overhead is low. Also, patrons can actually purchase artwork in our city at a more attractive price than in larger municipalities. Simply put, art is affordable here — both for the artist and the art lover. Another integral puzzle piece in our flourishing art scene is that the people in the galleries and running the galleries are friendly. Most of the galleries were started by artists (as opposed to business people) who are part of a tight-knit community. Only in Louisville will you find one gallery contacting another to find just the right piece for their client. We all work cooperatively.

Because of who and what we are, our city has managed to attract internationally acclaimed arts events such as the National Council on Education for the Ceramic Arts (NCECA) Conference in 2008 and the Glass Art Society Conference coming in June. These conferences bring together people from all over the world thanks to the strength of the visual arts in our city. What has happened is that Louisville once again has a viable downtown, inspiring more visionaries like Gill Holland, owner of The Green Building, and Laura Lee Brown and Steve Wilson, owners of 21C, to continue to invest in our city in creative and exciting ways. A strong, vibrant visual arts community breeds a strong, creative, livable city.