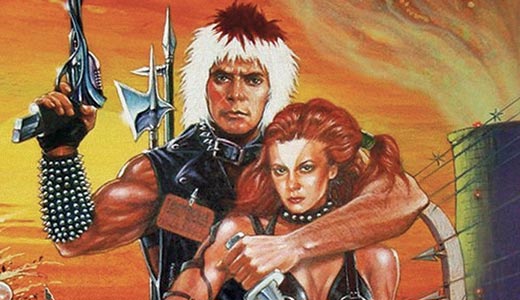 One of Troma’s all-time best, now on Blu-Ray! The kids at Tromaville High start acting stranger than usual after a gang of punks sells them weed grown in the green glow of the nuclear power plant next door. Total mindless carnage and loopy special effects from intro to credits, starring no one you ever heard of, and filled with odd, subtle references to the Three Stooges make this one of our favorite flicks. (And: Tromites rejoice! Company prez Lloyd Kaufman has announced that a new, updated “Toxic Avenger” is in the works!)

Poorly written, badly acted and stars no one you ever heard of, but this little culter inspired a legion of late-’80s Southern California film students to stop flipping burgers and hit the beach. Stud-bedecked surfer dudes ride post-apocalyptic woodie-wagons in an all-out war with a gun-toting grannie with a score to settle. Imagine Frankie and Annette meeting Mad Max — yet it’s all surprisingly tame … for a Troma film, anyway.

This latest plop of squishy romantic droppings from novelist Nicholas Sparks stars hot little Amanda Seyfried as a conservative college student who falls for hunky soldier-on-leave Channing Tatum. (“Channing”? Really?) Oh, how will she survive when he finally pulls out and returns to his unit?! Or is this that “pulls out his unit and …” Nevermind. Sloppy PG-13 hogwash.

MARKED: THE COMPLETE SEASON ONE

We just got back from a long-overdue beach vacation and can honestly say that we’ve had our fill of tattoos. What possesses otherwise gorgeous, intelligent, half-nekkid, sunburnt white women to emulate 19th-century Maori warriors? Well, if this History Channel series is any indication, it’s because they are patently nuts. Travel the globe to discover the hidden meaning and primitive power of purple flesh.

Low-rent SciFi Channel fodder with crappy CGI twisters taking a bite out of the Big Apple. Its only — and we mean ONLY — saving grace is its star, the mouth-watering Nicole de Boer (“Dax” from “Star Trek: Deep Space Nine”). A masterpiece.

Extremely popular arthouser from Vietnam about a 10-year-old orphan who plays matchmaker to two other lost souls. One is a lovely flight attendant and the other a zookeeper, far more comfortable with his animals than people. The magic of this film is how it reveals the world as children see it, stripped bare of all that adult nonsense that forces people to live lives apart and alone. Fearless filmmaking.

Documentarian Cindy Kleine introduces us to her mom and dad in this family photo album come to life. But the true grace of this film is the story it tells: one of life, love, adversity and family; so completely realized as to make you feel as if it is your own life on display. An amazing film, even if it sounds like a weekend at an old-folks home.

The much-anticipated video release of a minor cult hit, based on the books of Barry Eisler. Kippei Shiina is John Rain, a hitman who decides to protect the daughter of one of his victims from other assassins. What? Sounds like every other hitman-gone-good movie lately? This one stands above thanks to the presence of Gary Oldman, and the refined Japanese/English sensibilities of the filmmakers. Very entertaining, if imperfect.

An excellent little thriller inspired by Poe’s “The Tell Tale Heart” starring Josh Lucas, Lena Headey and Brian Cox. A single father goes on a manic search to find his heart-donor’s killer before the killer comes after him — drawn by the incessant sound of his heartbeat.

If you tire of watching overproduced, overhyped Hollywood blockbusters that you can’t remember a week later, check out this indie gem. A pair of men become the unwitting pawns of an ancient cult, battling physically, mentally and spiritually against their will. A challenging and intelligent tale — if admittedly flawed in spots — with a clever ending. A no-budget epic if there ever was such a thing.

Dark and disturbing big-budget adaptation of Cormac McCarthy’s grim apocalyptic novel. Viggo Mortensen struggles to lead his son across a blasted landscape populated by degenerate survivors who have turned cannibal to survive. And their meat of choice is children. This is too dark for even jaded film-screws like us to enjoy, but the performances by Robert Duvall, Charlize Theron, Guy Pearce and especially Mortensen are a wonder to behold.

It’s unlikely you ever heard of this flick, dating as it does to the mid ’60s, but it is one of the most important films to come out of Europe during that era. Among other things, it single-handedly launched the New German Cinema movement that greatly influenced such filmmakers as Stanley Kubrick (“Dr. Strangelove”). A young East German woman packs her belongings in a tattered suitcase and moves beyond The Wall to West Germany in hopes of starting a new life.

A More Complete Listing and Free Vids at www.videotapeworm.com!