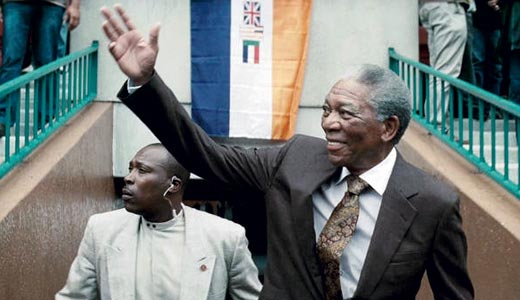 Imagine you’re Nelson Mandela. You’ve been jailed for 27 years for protesting apartheid … then freed and made president! What do you do next? Well, we’d be putting heads in a bag, but Nelson takes the high road and focuses on national unity through a rugby match. (Sheesh! And we thought Louisville was sports-obsessed.) This is the true story of that fight starring Morgan Freeman and Matt Damon, as directed by Clint Eastwood. A truly great and inspiring motion picture.

SHADOW OF FEAR/NIGHTMARE AT 43 HILLCREST

A pair of all-but-lost shockers from the late, incomparable Dan “Dark Shadows” Curtis. “Fear” is a wonderful tale of violence, mystery and madness starring Claude Akins, Anjanette Comer and Tom Selleck. “Nightmare,” based on a true story written by William Katz, part of ABC’s “Wide World of Mystery” TV series, concerns bad cops planting heroin in an innocent family’s home after storming the wrong house. It’s amazing how terrifying these two films are, considering their minuscule budgets and censored environments. Worth checking out.

The irrepressible Fred Olen Ray (he of “Attack of the 60-Foot Centerfold” and “Tarzeena: Jiggle in the Jungle”) takes on the Old West in this entertaining Oater based on real accounts starring Peter Fonda, Tim Abell, George Stults and Jeffrey “The Reanimator” Combs. And it’s rated PG!

While often dismissed as little more than an overblown Lifetime Channel movie-of-the-week-er, this may well be Harrison Ford’s greatest performance ever. He stars as a weary scientist, battling disease using unaccepted (and unprofitable) techniques. Brendan Fraser and Keri Russell are also in top form as parents who raise $100 million in a bid to save their children. Based on a true story and surprisingly directed by the director of “What Happens in Vegas.” Damn good stuff.

A long-overdue historical release of Daiei’s original giant flying turtle-monster outing. Meant to be a more kid-friendly version of Toho’s Godzilla, we’ve always had a soft spot in our hearts for Gamera — and he will forever be immortalized in MST3K’s famous lyrics, “Gamera is really neat. Gamera has loads of meat. Oh, we love you Ga-mer-raaaa.” A must-own containing the original, unedited Japanese version with English subtitles. Highly recommended.

First video release of a popular doc looking at the theatrics and incredible media machinations at the Democratic and Republican parties’ national conventions of 2008. Now, more than any other time in history, politicians are manipulating news and entertainment to subliminally influence voters. Yes, you ARE being controlled!

We’re certain you’ve never heard of this, but it’s an exceptionally good indie drama about two young adults trying to understand their place in the world. No budget whatsoever, but you’d never be able to tell from the finished product. A good, solid flick, and a primer on how to make a low-budget film.

Woody Harrelson is known for so many things and has done so many crappy movies, that we often forget what an exceptional actor he is. Here he’s front and center as the Army officer whose full-time job it is to notify families of the fate of fallen soldiers. Ben Foster plays a protégé who falls for newly widowed Samantha Morton, despite all military and social taboos. A truly exceptional drama, well written and superbly acted by all concerned. One of the best movies of recent years.

THE MONSTER AND THE APE

The “monster” of the title is a wonderfully hokey robot, the centerpiece of this long-forgotten SF/crime serial featuring some of the funniest cliffhanger “cheats” we ever saw. This thing is a major hoot; you’ll love it.

Did you know that Kevin Costner made a psychological horror flick in ’09? Well, apparently neither did anyone else! It’s a slow-paced thriller (think “The Others”) with Costner as a dad who moves his two kids to rural South Carolina. There, his daughter begins to misbehave, and he comes to suspect a supernatural intrusion. Not the best thing he’s ever made, but certainly better than its straight-to-video fate suggests.

THE SPY NEXT DOOR

Disney-esque family flick about a superspy (Jackie Chan) trying to balance everyday American suburban life and deadly espionage, co-starring George Lopez and Billy Ray Cyrus. Jackie decides to retire after falling in love with neighbor Amber Valletta, a woman with three kids who thinks he sells pens for a living. But his plans for cul-de-sac bliss are threatened by Russian terrorists after one of the kids uncovers his secret.

Every friggln’ actor in Hollywood stars in this uber-chick-flick, so saturated with estrogen that director Garry Marshall reportedly began menstruating during filming. Simply awful.

A documentary on America’s 50 million-plus Evangelicals, a politically powerful group who believe that: (1) Biblical prophesy of the end of the world is 100 percent true and accurate; (2) it’s all taking place as we speak; and (3) the constant war in Israel is proof that Jesus is coming to take them away, ha ha, ho ho, hee hee. In short: They do whatever they must to prevent peace in the Middle East, because that would mean they are all just a bunch of nuts. Oh, those wacky Christians!

A more complete listing and free vids at www.videotapeworm.com!