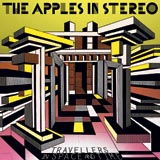 It’s hard to imagine how much more ornate the Apples in Stereo’s albums could get, as Travellers in Space and Time seems to represent the pole most opposite from the lo-fi charm of the band’s early EPs. (Note: The band intentionally misspelled “travelers” in the album title.) But it’s a testament to Robert Schneider’s impeccable melodic gifts that Travellers’ high-gloss sheen complements his sprightly pop as well as any of the band’s previous guises. Packed with swirling synths, sawing cellos and lush vocoded harmonies (not Auto-Tuned, mind you, but distinctly vocoded), Travellers takes its most obvious cues from ELO, but you’re just as likely to hear echoes of “Linus and Lucy” on “Dream About the Future,” or Hall and Oates on the irresistible “Hey Elevator.” At 16 tracks, each breezier and more effervescent than the last, Travellers is an embarrassment of riches sure to make a few year-end lists.