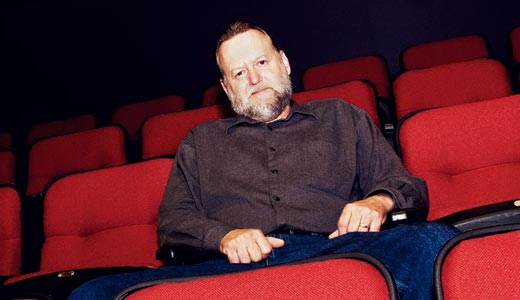 LEO didn’t spring to life fully formed. In the beginning, its eccentric observers were focused almost exclusively on political and social commentary. Nowadays, browsing early columns by John Yarmuth, Bob Schulman, Mary Caldwell, Denny Crum and Dudley Saunders is like stumbling upon a gang of smart, provocative kids suddenly unleashed to say anything at all.

It felt the same back in 1990 when I stumbled on the first perplexing, enticing issue at what used to be Hawley-Cooke Booksellers. “This’ll never last,” I thought.

But as the paper settled gradually into a regular bi-weekly, and then weekly, publication schedule, I kept picking it up, as did all of us who were hungry for new and alternative viewpoints in that long-ago era when personal computers still operated on DOS, and the dream of graphic user interfaces, the World Wide Web and social networking were still vaporware.

Still, if you look for features, stories about the arts or arts criticism in the early issues of LEO, you’ll look in vein. The Founding Editors — even Dudley Saunders, veteran Courier-Journal theater critic — were more interested in politics than the arts. Which is not to say they weren’t interested in human comedy and tragedy; just that they preferred poking fun at Dan Quayle, speculating about the night Donnie Wahlberg and New Kids on the Block set fire to a hallway at the Seelbach, arguing about whether General “Stormin’” Norman Schwarzkopf should be grand marshal of the 1991 Pegasus Parade, and touting the civic promise of what we now know as the Great Lawn (when it comes to local politics, the Founding Editors were prescient indeed: By 1991, John Yarmuth was already referring to Jerry Abramson as “mayor for life”).

By the summer of that year, LEO was covering music, cinema, the visual arts (Lori Gray’s first column appeared in April) and books (Stacy Estlick entered the mix in July). And calendar listings signaled a thriving theater scene.

But it was February 1992 before LEO first published a substantive piece dealing with Louisville’s theater scene. Danny O’Bryan, “nightlife” columnist and jazz critic for the Louisville Times in the 1980s (and now host of “Jazz Insights” on WFPK), was a playwright and actor with a deep sympathy for Louisville’s independent theaters. Over the next five years, he set the tone that has driven LEO’s theater coverage in the decades since.

“I especially loved the small companies,” O’Bryan says in a telephone interview. “Theater is an ephemeral art, and it seemed to me that if a production wasn’t reviewed somewhere, it just faded away as if it hadn’t happened. So I really had two missions in those days. Of course I wanted to inform readers about what was going on in those companies, but I also wanted to preserve the memory of what those companies were doing.”

Those early reviews (Bunbury Theatre was the subject of O’Bryan’s first column) mixed education and evaluation in equal measure. He covered productions like “The Day They Shot John Lennon” (Bunbury), “Meet Me in St. Louis” (Derby Dinner Playhouse), “Creeps” (Guyland-Witt Theatre Company), and productions by groups like the Necessary Theatre, Not Ready for Shakespeare Players, Kentucky Contemporary Theatre, the Roundtable Theatre, the Boat House Troupe and the Alley Theater.

The reviews were generally kind — though O’Bryan could occasionally throw a barbed hook — and always informative. Assuming, rightly, that most readers wouldn’t be familiar with the backgrounds of the troupes he was covering, O’Bryan was a stickler for detailed accounts that traced histories, pedigrees, connections and made a strong case for the artistic credibility of the independent theaters.

By my informal count, during the first couple of years, O’Bryan spent most of his nights in venues like the Rudyard Kipling, Artswatch and the MeX, places where audiences were more likely to be counted in dozens than in hundreds, writing about productions that otherwise might not have been covered at all.

In time, O’Bryan would turn the theater beat over to writers like Rick Mattingly (coincidentally, another jazz aficionado), and then to folks like Jenny Sandman (who now writes for “Curtain Up”), Rebecca Haithcoat (now earning a master’s degree in arts journalism at USC), Sherry Deatrick (editor of www.theatrelouisville.org), and, more recently, Laura Morton and yours truly.

But over the years, LEO’s editorial emphasis on discovering and highlighting the creativity found in Louisville’s smaller theater companies has never diminished. And though it’s hard to quantify LEO’s precise effect, there’s no question it’s been significant.

Ask Juergen Tossman, producing artistic director at Bunbury Theatre, about LEO’s role in nurturing Louisville’s theater scene, and he sums it up in one word: “Vital.”

When LEO started, The Courier-Journal had a “five-year rule” for covering theater companies, Tossman recalls. “There’s always been a tendency for companies to suddenly appear, put on one or two shows, then disappear. The ‘five-year history’ was The Courier-Journal’s standard for deciding what to cover. Then LEO came along, and suddenly everything was getting covered in a much more exploratory and systematic way. Suddenly there was an alternative voice — our productions were being reviewed by two people with different perspectives, and audiences could pick and choose among those different viewpoints. And bear in mind that small theater companies have very little money to spend on advertising and public relations, so the impact of reviews on raising awareness of what we’re doing is enormous. Any review, good, bad or indifferent, helps audiences find their way to the theater. Last month, Laura Morton gave our production of ‘Holy Tolle, Swallow that Ego’ a not-so-positive review — but in our after-the-play talk-back sessions, when we asked how people had found out about the play, many of them had come just because of that review.”

Judith Egerton, who observed Louisville’s theater scene as The Courier-Journal’s theater critic from 1995 until 2009, agrees with Tossman that during her tenure, LEO had a positive effect on the scene. “From my perspective, LEO’s coverage really accomplishes three important things,” she says. “First, it gives readers and audiences the opportunity to choose between multiple critical viewpoints, and that’s a really important factor in building a healthy, creative theater scene. Second, LEO really does a great job of giving exposure to small groups that need and deserve nurturing. Third, LEO has furnished a venue where writers, especially freelance writers in the early stages of their careers, can find their voice and develop the sort of mature critical perspective that really contributes thoughtful ideas to the artistic dialogue in the Louisville arts scene.”