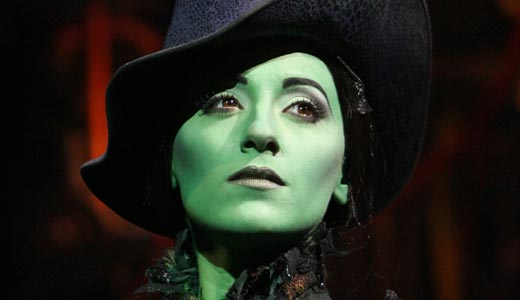 LEO: What’s the worst part about the green makeup?
Donna Vivino: Getting it off at night, honestly. You know, the show’s over and I really just want to go home, but I have to spend a good 20-25 minutes getting it off properly. It’s not really hard to get off, there’s just a lot of it.

LEO: As a kid, were you afraid of the Wicked Witch of the West?
DV: Actually, I thought she was cool. I used to imitate her all the time; I was not afraid of her. I guess she was a pretty frightening character, but I’d run around the house saying, “I’ll get you my pretty, and your little dog, too.” I guess I always wanted to be the villain — but, you know, she’s not in our show.

Also, we exalt people really quickly in this culture, and Glenda sort of goes through that as well (in “Wicked”). With publicity, with press — it’s interesting how there can be a mob mentality about things. We can have someone who we absolutely adore, and then can turn around and say we don’t like them anymore. I think it’s human nature to assign blame. It somehow makes us feel like we have control over something, even though we don’t.

LEO: Do you think the Wicked Witch of the West would have Twittered?
DV: No. Glenda would have been totally Twittering. But Elphaba would have taken her computer and thrown it out the window. Glenda is sort of Twittering and is always feeding the masses and wanting that popular sort of thing. But Elphaba is much more of a private person. As much as she’s an activist and revolutionary, I think there’s a part of her, too, that would find something like that frivolous.

LEO: What’s your favorite part of a tour?
DV: My favorite part is being able to see the cities and experience new audiences — how they might find something funnier than others. I love seeing the universal love for this show all around.

LEO: Your least favorite part of a tour?
DV: Being away from my family and friends. My mother doesn’t fly, so I don’t get to see her very often. She did fly only once when I was on tour because she really missed me; she actually flew to Louisville while I was on tour there.

LEO: Have any memories of Louisville from the last time you were here with the show?
DV: I really loved Proof (21c Museum Hotel). I can’t wait to go back. On my blog on my website, I wrote everything I loved about Louisville last year. I didn’t get to go to Lynn’s (Paradise Café), but I’m doing that this time. And I’m on a mission this year to find the best pizza in every city. I’m a New Yorker, so I’m a tough critic, but I’ve found great pizza in every city we’ve been to.

LEO: If you could pick any Broadway show to star in, what would it be?
DV: Well, “Wicked” was my dream, and I got that. I would love to do “Funny Girl.” I’m waiting for someone to do “My Big Fat Greek Wedding: The Musical” — I think I’d be perfect for that role.

LEO: Who would you like to work with?
DV: I really would love to work with Julie Taymor, who did the “Lion King”; Carrie Mulligan — I just saw “An Education” — I think she’s so fantastic; and Bartlett Sher, who did “The Light in the Piazza” and the “South Pacific” revival — maybe it’s not that far-fetched, since he does a lot of musicals.