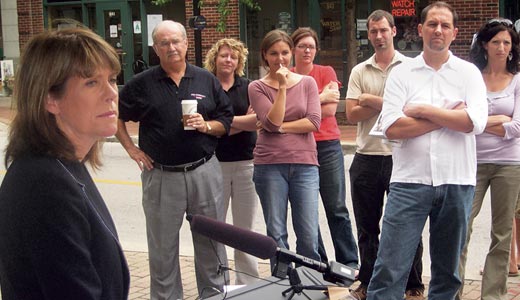 If somebody had told me 20 years ago that LEO would still be publishing today, I’d have laughed out loud and said something like, “Yeah, sure, and someday John Yarmuth is going to be elected to Congress.” Who was going to read an “alternative” newspaper? Alternative to what? Surely not the comfortable lifestyles that make Louisville such a wonderful place to live, work and raise a family. Heck, who was going to read a paper that got much of its advertising from — oh the horror! — strip clubs?

Well, I was as wrong as all the Republicans who thought they could beat Jerry Abramson. What I didn’t realize at the time was how Gannett would change The Courier-Journal after it folded the afternoon Louisville Times, and how technology would change everything. If anything, LEO was ahead of its time, the pre-cursor of today’s bloggers. By striving to tell the unvarnished truth, it exposed the traditional media — and I’m talking about radio and TV as well as the C-J — as being woefully out of touch.

I had a chance to be in on the ground floor of LEO.

As I recall it, I got a phone call from Yarmuth about joining some of my former Courier-Journal and Times colleagues to discuss the founding of a newspaper that would be an alternative to the media establishment.

I was intrigued because, well, Yarmuth was a card-carrying member of Louisville’s social and business establishment. He was a scratch golfer who seemed to mostly manage the money he had either inherited or earned. In other words, the last guy you would ever expect to want to rock the boat.

At the time, I was working for Sports Illustrated and doing two sports columns a week for The Lexington Herald-Leader. Nevertheless, the idea of again writing for a Louisville audience intrigued me.

From August 1974, when I succeeded the late Joe Creason as the C-J’s general columnist, until December of 1986, when I resigned my dream job as the paper’s sports editor under duress from new owner Gannett, I had been a virtual daily visitor on the community’s breakfast tables.

Over the next few years, I missed my Louisville readers, and some of them apparently missed me. In fact, when I got Yarmuth’s call — I think it was late 1989 — I’d already been approached by Mike Kallay, a dear friend and former Times managing editor, about doing a sports column for his fledgling publication, Business First.

Mike was a sharp guy. He figured that since sports was a hot topic around the water cooler at just about every business in Louisville, he would give his readers perspective and opinion on sports that they weren’t getting in the C-J. Plus, he figured a sports column would be welcome relief from the sometimes-tedious news of the business world.

I was comfortable with Mike, whom I knew to be a talented and respected newspaperman, but I wasn’t sure what to make of Yarmuth. I knew him mainly as a University of Louisville sports fan who was such close friends with Coach Denny Crum that he wanted Crum to do a column — which would be ghostwritten by John, I assumed — for his new publication.

I remember having a pleasant meeting with John and the other C-J and Times expatriates whom he wanted to be partners in his venture — Mary Caldwell, former society editor of the Times; Dudley Saunders, former arts critic of the Times; and the irascible Bob Schulman, former media critic for both papers.

As John outlined it, he would put up the money and make us partners in exchange for contributing a column every week. I don’t even think we discussed personal ads and strip joints at that first meeting. I’m positive we didn’t discuss the idea that John would use LEO as the springboard to a political career.

I enjoyed the meeting immensely, but decided to hold onto my Sports Illustrated gig and take the Business First offer instead of becoming a founding editor of LEO. The reason had little to do with the fact that Kallay had far better journalism credentials than Yarmuth. It boiled down to money — Kallay was offering to pay me in genuine American currency and Yarmuth was offering the pleasure of his company.

For a guy who had two daughters nearing college age — one of whom had her heart set on Duke University — the decision was a no-brainer.

At the time, I figured Business First would be around a lot longer than Yarmuth’s publication, to which he attached the funky name of Louisville Eccentric Observer (LEO). I knew the C-J wasn’t serving the business community’s needs, but I wondered what niche LEO might fill.

Well, to use sports terminology, LEO took what the C-J gave it. As Gannett shrunk the C-J’s staff and news hole, more and more stories went uncovered. In many cases, LEO was there to fill the void with excellent reporting, writing and commentary.

Over the years, I became an avid LEO reader. For one thing, the paper’s quality of journalism was far better than I expected. Besides that, much to my delight, Yarmuth turned out to be an exceptional writer and astute political pundit.

It’s to John’s eternal credit that despite his personal wealth, he always has stood up for the underprivileged, the downtrodden and the disenfranchised. In that regard, he is a classic liberal in the mold of the Kennedys.

My gig at Business First lasted until 1997, shortly after Kallay left Business First for a job in Hawaii. But it would be nine more years — after Yarmuth sold LEO so he could enter politics — before I finally hooked up with LEO as a “senior” editor, a title bestowed mainly because I was the only one around who had seen Little Richard and Jerry Lee Lewis in person.

I had lunch with Cary Stemle, then editor of LEO, at the Broadway deli that, in its previous life, had been Teek’s World Famous New York Bar & Grill, an aromatic watering hole favored by editors, reporters and pressmen.

By the time I finally joined LEO, it had become far more than the paper that had all those strip-club ads. It had become even more of a viable alternative to the C-J than Yarmuth originally envisioned because, when it was founded, nobody could foresee the advent of the Internet age and what it would do to newspapers and other “traditional” media.

I enjoyed my stint at LEO because it reminded me of the old days at the C-J, back in a pre-politically correct time when the quest for excellence also included a lot of fun. We did some good stuff during my tenure. It was a joy to work with Stemle, who did an excellent job carrying on Yarmuth’s mission, and I met a young writer named Stephen George, who was as gifted as he was idealistic. He stepped in as editor when Stemle and LEO parted ways, and held the job until leaving for Nashville year.

Today LEO looks slicker than it ever did during Yarmuth’s tenure. It also has become more socially acceptable while remaining true to the founder’s vision, a tough trick to pull off. I’d also make the case that due to the unfortunate demise of the C-J and the rational talk shows on WHAS Radio, LEO now is more important than ever to our community dialogue.

Since day one, there have been no sacred cows at LEO. But there has been a devotion to doing what good newspapers always have done — serving as a watchdog on the public’s behalf. While at LEO, I once got a note from my former boss, Barry Bingham Jr., saying he looked forward to reading LEO so he could see what the C-J wasn’t telling its readers.

If imitation is indeed the sincerest form of flattery, then Gannett flattered the hell out of LEO when it came out with Velocity. But the way I see it, Velocity is LEO Lite. It covers the youth scene — music, nightclubs, parties, etc. — but it can’t lay a glove on LEO when it comes to serious reporting and commentary.

I guess my favorite memory of LEO is the time Anne Northup’s campaign demanded LEO provide copies of every column Yarmuth had written. Apparently they wanted to assign some poor schmuck to read them all in search of statements that could be used against Yarmuth, who was challenging Northup for her seat in Congress.

It came to a head when Northup held a press conference in front of LEO’s offices on Fourth Street. The staff gathered outside and politely listened to her demands that we turn over the evidence that Yarmuth was a (boo, hiss) LI-BER-AL!

It was wonderful street theater on a hot summer afternoon. It also provided excellent fodder for our next issue. Looking back, I think that’s the day I became convinced John Yarmuth, the guy who asked me to be a founding editor of his off-the-wall publication, really could be elected to Congress.

One last thing: When the LEO movie is made — shall we call it “Citizen Yarmuth Goes to Washington”? — I want Kevin Costner to play John. He doesn’t know anything about journalism, but he’s got the right golf swing.