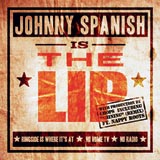 A pretty impressive effort from the Louisville-bred New York resident. Able to parlay his networking (to say nothing of his microphone) skills into collaborations with producer CHOPS (Mos Def, Pharoahe Monch, etc.) and Nappy Roots, Johnny has made a solid effort, one that is far worthier than to give away for free digitally (thanks for that, though). His is a singsong delivery, with varied flows that match whatever beat he happens to ride. His voice may be a bit higher than what I tend to favor from my emcees, and there may be a precociousness to his energy that may turn off some listeners. Those listeners are missing out on a disc that fits the spring weather like a glove. Well-placed samples (as varied as Fela Kuti and Billy Paul) complement the songs and subject matter, which tend to be lighthearted (girls and narcissism) but not lightweight. One or two songs may get a little synth-heavy, but the good far outweighs the bad here.