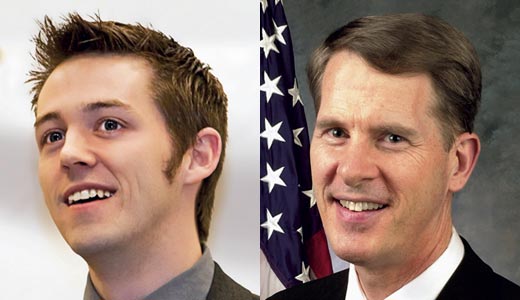 Extending from 26th Street in the west, Hubbard’s Lane in the east, a swath of River Road to the north and large chunks of the Smoketown, Old Louisville, Limerick and California neighborhoods to the south, the resultant shape of Kentucky’s 41st House District is a strange one: It looks kind of like an hour glass — heavy on either end, narrow in the middle — if the hourglass was smashed with a hammer.

As a result, the district boasts one of the most diverse, Democratic-leaning populations in the state in terms of socioeconomics and race, home to both the soon-to-be-demolished Sheppard Square housing projects as well as Crescent Hill’s Mary T. Meagher Aquatic Center, which reside in two very separate, distinct parts of the city, but which share one thing in common: Rep. Thomas Riner.

For 28 years, Riner, 63, has represented the district’s interests in Frankfort, making him one of the three longest-serving legislators in the state. This longstanding reality could change in less than a week’s time, however, as Riner now faces what amounts to his strongest primary opponent in nearly three decades in the form of Mike Slaton, a Metro Parks employee who styles himself as “the progressive choice” for the 41st.

At first glance, the candidates appear to have little in common. Riner is a pastor at Christ is King, his own Baptist congregation that meets in the home he shares with his wife, Claudia. He also is an ardent supporter of anti-abortion and “traditional” marriage legislation. Slaton, on the other hand, is an openly gay man who resides in Phoenix Hill with his partner, Jake, and worked as an organizer for the Fairness Campaign.

“I like Mike,” says Riner. “What I like most about him is that he’s forthright. I’ve got more in common with Mike than I do my conservative friends. It’s very important, I think, that he can share things about his partner in an open way. Most gay politicians get married (to a woman) and do whatever they have to do to save their career. But (Mike is) very forthright, and I respect that. At the beginning of the campaign, I told him, ‘I know you’re not listening to your political advisers.’”

And it’s hard not to like Mike. A University of Louisville graduate, Slaton’s boyish countenance (he’s 28) belies a deep, enthusiastic knowledge of the factors impacting the district, chief among them a lack of access to public transportation and fresh, quality food, which he considers a civil right.

“We live in a food desert here,” Slaton says. “We’re in areas where, in the central and western parts of this district, you cannot get fresh fruits and vegetables at a price that working people can afford. That’s a social failure, and it’s not acceptable, especially when we have people in this county and in surrounding counties growing food. We have fresh food within an hour of here, and yet we cannot get it in our urban core. I want to change that.”

Running on a platform of “social, economic and environmental justice for all,” Slaton says Riner has had 28 years to improve the 41st’s lot, and that the time for new blood has arrived.

“I don’t think our current representative has done enough for this community,” he says. “We could be a lot further along than we are, and I want to help move us there.”

Responding to this critique, Riner attributes his characteristic avoidance of Frankfort’s closed-door politicking to the perceived lack of progress.

“Say there’s legislation that I’d like to get through,” Riner says. “If I put it out as a regular bill, the leadership will kill it, and so I guess the general public thinks all bills are heard and have to be voted on. We had literally hundreds of bills introduced this year, but only 120 House bills became law. There’s a very tight grip on what actually gets heard in committee.

“If (Mike and I) were both in office,” continues Riner, “most of our votes would be in line 90 percent of the time. We’d be the same vote, because you see, all the controversial bills we never get to have an opportunity to vote on. Whether you’re a liberal or a conservative, everyone should support doing away with secret caucus meetings.”

But that remaining 10 percent might make all the difference in the race. Last year, Riner caught flak for legislation he introduced in 2002 and again in 2006 mandating that language recognizing God’s role in protecting the commonwealth from terrorist attacks be included in the state’s homeland security bill, as well as mandating the Ten Commandments be displayed in courthouses across the state. While national “hot-button” issues like abortion and gay rights rarely factor into smaller-scale elections like this, Riner’s piety has cost the state nearly half a million dollars in legal fees in lost case after lost case in defense against the American Civil Liberties Union.

Riner also has repeatedly co-sponsored anti-choice legislation that would force women seeking abortions to undergo mandatory ultrasounds, and believes in the “traditional” definition of marriage between a man and a woman.

“I don’t think the traditional definition should be changed or tampered with,” he says. “That’s like trying to … like hiring a bunch of laborers that are not skilled in architecture and structural engineering to move a bridge: Someone is going to get hurt.”