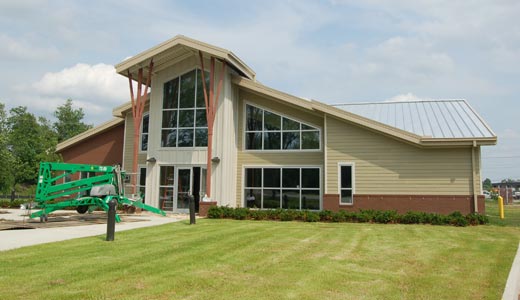 At 3520 Newburg Road, just past a winding off-ramp flanked by thickets of trees and roadside undergrowth, sits Louisville Metro Animal Services’ new adoption center, dubbed “The Puppy Palace” by those who’ve been tracking its troubled progress. With an architectural style that can best be described as “post-apocalyptic church,” the 10,000-square-foot temple is situated on 8.48 acres, towering over the cars of an adjacent Metro body shop, whose varying makes and models are lined up in rows, glistening under the afternoon sun.

With the exception of nearby traffic, it’s relatively peaceful here, if only because The Puppy Palace isn’t open for business yet, despite the fact that the facility was originally slated for completion months ago. In fact, herding the $3.45 million expanded shelter to completion has proven difficult from the start: Metro Council first appropriated funds for the new adoption center in 2006, well into the tenure of embattled former LMAS Director Gilles Meloche, who resigned amid a firestorm of corruption last fall.

During his reign, Meloche took a reasonable expansion plan proposed by his predecessor, Eric Blow, and magnified it, envisioning a 72,000-square-foot Shangri-La for Shih Tzu. The Puppy Palace is merely the first phase of that grand plan, with continued expansion expected over the next decade.

The current result, however, is far from church-like: According to sources who work closely with LMAS, the unfinished structure is sporting a massive crack running through its floor, which forced contractors to bust it up and start over. A painter on the site tells LEO Weekly he didn’t know whether they’ve tried reinforcing the load-bearing walls, which have buckled due to unknown reasons.

“It’s been pretty messed up since the beginning,” the painter says, pointing out the crack they had him brush over that runs floor to ceiling along a load-bearing section of the frame. The contractor, Bornstein Building Co., failed to return several calls made by LEO, and the painter was unsure if they had taken measures to correct the problem.

LMAS spokeswoman Jackie Gulbe confirms the floor had to be busted up and then repaired.

“I’m probably not the most informed person on what is going on as far as construction,” she says, “but I have been told that they are in the process of re-pouring the concrete.”

Metro Councilman Kelly Downard, R-16, a longtime member (and former chairman) of the Government Accountability and Oversight Committee and a longstanding critic of Meloche, was not aware of the lagging progress or structural problems.

“I have not been out there,” he says. “We’ve had some calls … in all honesty, I get a lot of those calls. But I tend to wait until I hear from as many people as I can before I reach a consensus decision. My chief concern has been concentrated on the existing facility.”

The construction snafu is “a bump in the road,” Downard says, and “a correctible one at that. I’m laying a lot of the blame on the contractors and Public Works (officials) overseeing it. I will definitely be looking into this now.”

In the meantime, Louisville Metro Animal Services’ 51 full-time employees must cope with increasingly unpleasant conditions at their only shelter, located at 3705 Manslick Road. Without immediate relief in sight for the nearly 50-year-old facility, conditions there have little hope for improvement.

“That building should’ve had a bulldozer taken to it long ago,” says Blow, who served as director of animal services in Louisville for 27 years, prior to the merger of city and county. He was behind the S.P.O.T. mobile spay/neuter truck that, under his successor Meloche, was ordered permanently parked at the Manslick compound, thereby negating the intended purpose of the truck, which Blow says was “to take it out to the low-income, under-served areas of the city…

“The city has an obligation to educate, that was my philosophy,” he continues. “The main thrust was public health and safety. Some would argue that’s not really government’s function. I can’t tell you how many (city officials) say we don’t need to build a Taj Mahal for dogs. Every time I spoke with them about the need for a new facility, they’d turn me down.”

Eventually, Blow left public service when he felt like he “was being led down the garden path” after merger.

“We hired the same fundraising group that does the Olmsted Conservancy’s fundraising to figure out how much money we could raise (for a new building),” he says. “Nothing was going to come out of the budget. It was estimated we could get at least a million dollars raised. The mayor was disappointed, but for me, it was quite gratifying. Ten years before that, you couldn’t have gotten the community to give us $100,000. But I could see this was going nowhere with them.”

Blow departed, and Mayor Jerry Abramson appointed Ann Camp as interim director before replacing her with Meloche in 2005. At this point, Blow maintains the Manslick facility is severely ill-equipped and overcrowded. At the rate LMAS is completing its new facility, he says they’ll be dealing with problems for a long time to come.

“I’d be shocked if there’s a phase two,” he says. “When you go at it piecemeal like this, it doesn’t lend itself to optimism. Now, with shape of the economy… I think we had the opportunity seven or eight years ago, and I think it’s gone, unfortunately. But I’m not in it anymore, I do consulting work for other cities — just not this one.”

LMAS volunteer Jessica Reid — founder of the nonprofit No Kill-Louisville — says that while things have improved under Meloche’s replacement, interim Director Wayne Zelinsky, conditions at Manslick are still nowhere near where they need to be.

“It was quite a transition, as you can imagine,” says Reid, whose first day as a volunteer occurred on the same day as the ’09 flash flood that inundated the shelter with water, killing several cats and dogs. In her nine months as a volunteer, she has witnessed a more open environment blossom under Zelinsky.

But that doesn’t change the fact that LMAS is “still killing animals by the hundreds every week,” according to Reid, who believes that despite such a grim statistic, Zelinsky is doing the best he can with the mess that was handed to him. She says Zelinsky has been more encouraging to volunteers and third-party rescue groups, and that he expresses an interest in the no-euthanasia movement.

“I like the phrase ‘cautious optimism,’” Reid says. “It’s almost like, could something better be around the bend? You’re afraid to believe it. Promises can be made, but are they gonna follow through?”