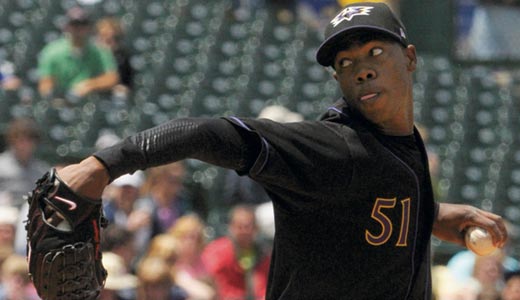 Aroldis Chapman stands tall on the mound. He sights his sign, plants his left foot (he’s a left-handed thrower), and twists back to begin his wind-up. It’s a nice and easy motion. No big leg kick. No exaggerated gyrations. As he twirls back toward home plate to deliver his pitch, Chapman doesn’t seem all that different from a thousand other pitchers you’ve seen. It’s what happens next that makes the 22-year-old lefthander one of the biggest stories in baseball — because when Aroldis Chapman snaps his wrist, the ball flies off his fingertips at 100 miles per hour.

There is the back-story of Chapman defecting from the Cuban national team while in the Netherlands for a tournament and seeking temporary asylum with the tiny European principality of Andorra before signing with the Cincinnati Reds for $30.25 million in January. The Reds assigned Chapman to their Triple A farm club in Louisville, and baseball is following his every start. There’s also the personal story of a kid suddenly thrust into the bright limelight of big-time sports in a foreign land, with family and friends left at home in Cuba, at least for now.

But the rest of the story of Aroldis Chapman — what makes him different — unfolds every five days or so when he takes his turn on the mound for the Louisville Bats, when any pitch he throws might be clocked at 100 miles per hour.

It’s a big number in baseball.

Walter Johnson was said to be the hardest thrower ever when he pitched for the Washington Senators from 1907 to 1927, before the invention of radar. After World War II, the U.S. Army timed Cleveland Indians ace Bob Feller electronically at 98.6 miles per hour.

Nolan Ryan is recognized as the fastest pitcher ever reliably timed, at 101 mph. Today, only a handful of pitchers are said to reach 100. Most are big, burly guys, like Chicago’s Carlos Zambrano, with broad shoulders and a substantial middle that gives them leverage. They usually add a hefty “humpfff” when they let it fly.

But Chapman isn’t built like that. He’s 6-foot-4, 185 pounds, with no big gut or grunts. Looks more like a college basketball player — like one of those left-handed gazelles from Denny Crum’s University of Louisville teams. Sleek, sinewy, strong, quick.

“The other day,” Power says, “Aroldis was telling one of our players, ‘I can’t really shoot the basketball, but any dunk you show me, I can do.’”

What Cincinnati and the Bats want Chapman to concentrate on is the pitching part of being a pitcher — changing speeds and controlling his breaking pitches. Power pitched 13 years in the majors, and has coached for eight. He’s thrown heat, and seen heat, and is not about to go gaga over Chapman.

But Power says frankly, “You know, this is a kid that’s got the best arm I’ve ever seen. As far as the velocity that comes out of that arm, I’ve never had a player that throws that hard. I threw hard, but not that hard. So the ability is there.”

There are, of course, the raw edges. In seven starts, Chapman is 3-2, with a 4.63 earned run average. He’s struck out 41 batters in 35 innings, but also walked 21. And while he breaks a lot of bats, a few hitters have rocked him hard. One even hit him in the butt with a line drive.

“For somebody that throws as hard as he does at just 22 years old, I’d say his command is very good,” says Power. “But that’s for a guy who’s 22. If he was 30, he probably wouldn’t be pitching. His command needs to improve that much.”

It’s something Chapman seems to realize.

“I feel good about my progression,” Chapman says, speaking through Bats training coach Tomas Vera, who serves as a translator for Chapman, and a bit of a mentor. “My breaking pitches are getting better, and I am learning to change speeds to get hitters out. I feel good about it.”

So does Bats manager Rick Sweet, who likes the natural movement Chapman gets on his slider, a pitch that comes in like a fastball, but breaks sharply nearing the plate.

“I don’t think he knows how he’s doing it when he’s doing it — yet,” says the manager. “Sometimes he’ll get his fingers just a little off center gripping the ball, maybe, and that breaks the other way. Part of his effectiveness is so many pitches move, both ways, and as a hitter, that’s devastating.”

As is changing speeds. The other day, Chapman got himself out of jam by following a 95 mph heater with a 79 mph change-up.

Rochester manager Tom Nieto got his first look at Chapman a couple Sundays ago when the Red Wings visited the Bats at Slugger Field. Nieto came up through Louisville when the Redbirds were part of the St. Louis Cardinals organization. He caught for the 1983 Louisville team that drew a million fans.

“I don’t know how accurate the (radar) gun is out there, but that’s an awful easy velocity he’s got,” Nieto says. “You watch him from the side, and you’re not really sure how fast he’s throwing. But as I would go out to coach third, I would sort of go by as close as I could to home plate to see him warm up. It’s so easy, but it’s coming in there pretty damn good. He’s obviously something special, that’s for sure.”

Nieto also is interested to see what Chapman has besides his fastball.

“As a young pitcher, that’s important for him,” he says. “There’s a saying that in the big leagues, the hitters can hit a rocket ship coming through there. So you have to learn to pitch and to change speeds. And it looks like he’s on his way to doing that.”

With some occasional rocky innings.

The good news is there’s no panic in Cincinnati to rush Chapman up to the major league. The Reds are loaded with good, young pitching and can take their time with Chapman, perhaps bringing him up for a look in September, after the Bats International League season ends on Labor Day.

Right now, Chapman’s next 100 mile-per-hour heater is scheduled for sometime in a Bats homestand that begins this weekend.