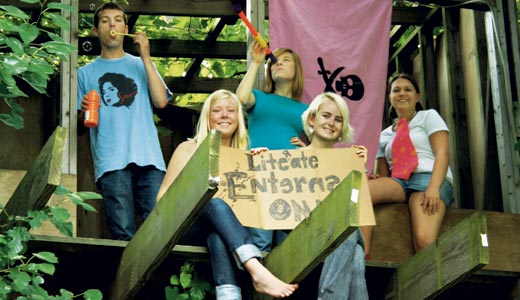 The summer of 2008 aged me — in a good way, mostly. I’ll always remember my internship at LEO as a crucial milestone of my career and a wonderful but slightly bizarre experience that shaped me in some, well, interesting ways.

It all started long before those hot three months, though — all the way back in my junior year at Assumption, when I selected LEO as my job shadow site because, frankly, it sounded cool. I spent the morning staring at Sara Havens, watching her read e-mails until she finally got so creeped out that she handed me a stack of proofs and a red pen. For my job shadow paper, I was required to conduct two interviews that day, so of course I chose Havens, and for my other subject she assigned one of the new staffers, a sharp lad named Stephen.

Four years later, this character would mosey through the doors of the coffee shop where I worked, and I would strike up a conversation. “Oh my god, you’re like, Stephen George, right? I like, job shadowed at LEO one time and, like, interviewed you or whatever.” I told him I was on the yearbook staff in high school and now shot photos for U of L’s newspaper. He told me LEO was accepting applications for internships and that I should apply. I decided to give it a shot. Even if I didn’t get the position, creating a résumé, writing a cover letter, throwing together a portfolio and having an interview (if I got that far) would be a good experience, right?

The e-mail was succinct: “Congrats. You’re in. When can you start?” I was subsequently thrown into the alt-weekly world, performing the finest of grunt tasks but also doing some pretty important stuff, too, like shooting the cover photo once in a while and writing my very own half-pagers. There were five of us in all — me, Aaron, Cassie, Jess and Caitlin — my homies who eased my pain and gave me someone to talk to endlessly about life at LEO. The office environment was productive, casual and usually quiet — save for the times any of us were giggling while proofreading a funny article or whenever Anne Northup drama came up. Quirkiness and snarkiness were acceptable, even encouraged. I was honored that this was my taste of the real world, and I felt there was hope for me. I can’t deal with dull. I learned this along with a few important lessons, including some of Stephen’s best advice: “Don’t let anyone tell you you’re too young.” Here are some other nuggets I picked up:

• How to navigate downtown Louisville and the West End by car, TARC or foot.

• How to use the ¶ tool on MS Word. I haven’t been able to type a document without a tiny dot in between every word since (as if I didn’t already have enough neuroses).

• How to transform a vague and confusing press release into a refined and informative work of art known as a Staff Pick.

• How to get a badass local female rapper to freestyle in the middle of Heine Brothers.

• How to knock out pages of community listings at warp speed while staring out the window at all of the freaks parading down Fourth Street.

• How to actually pronounce Louisville correctly. Now people think I’m not from here.

• How not to have a panic attack when an editor leaves me a voicemail saying he/she has a few “questions” about my article.

• How to spend two hours trying to come up with clever headlines for News of the Weird.

• How to get my face in the Staff Picks section by accident. Lesson learned — don’t send Ben Schneider any goofy photos of myself as a joke, because he just might print them.

• How to find a church for a photo shoot. The Catholic churches wanted nothing to do with it.

• How to be the Bar Belle’s BFF without ever having a drink with her. I was still an underage indentured servant who knew her boundaries. I did get to sit at her desk once when she was out of town, though. It is a magical place.

• How to get away with vivacious and semi-inappropriate writing. Bitches.

• How to successfully grasp all of these life lessons and be hired as a freelancer, having neither made a single pot of coffee nor provided any sexual compensation.