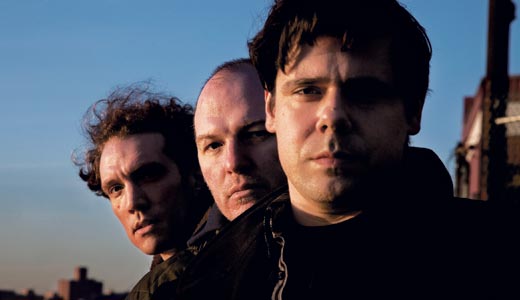 “The last record had kind of a clinical feel to it,” says Mark Morgan, singer and guitarist for Brooklyn experimental-noise trio Sightings, of the band’s 2007 album, Through The Panama. Last month, Morgan, drummer Jon Lockie and bassist Richard Hoffman released City of Straw, an eight-song collection, and celebrated 10 years of staying on the sharp side of innovation. “It just goes in cycles for the entire career of the band,” Morgan says. “There’s periods where you’re collectively excited about stuff you’re working on, then you hit a dry period. It’s a lot of back and forth.” The title City of Straw was inspired by the 2006 book “Planet of Slums,” author Mike Davis’ examination of poverty in the Southern Hemisphere, where whole cities were built out of garbage. Straw was recorded at the Ocropolis with Kid Millions (Oneida, Brah Records) and features keyboardist Pat Murano (No Neck Blues Band).