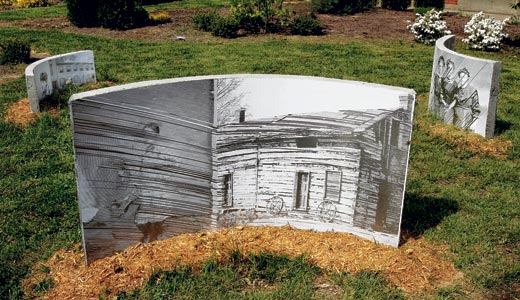 In the tendrils of southern Louisiana, just a toe outside of the New Orleans limits, stands the community of Saint Bernard Parish. The quaint city, also known as Versailles, hosts one of the largest communities of Vietnamese outside of Vietnam. It has been five years since Hurricane Katrina made a bee-line for the area. Post Category 3 storm, the years of garbage, debris and plight finally will be removed. Where will it all go? The leaders of New Orleans suggested a landfill, although it would be toxic. Yet the idea was approved and set to be built in Versailles, whose citizens were the last to know. The documentary, showing twice on Thursday, follows the inhabitants’ fight to preserve their serenity, for their health and for a say in the destiny of their own home. —Jess Mahanes

Robert Kelly is one of the busiest comics on the circuit today. Hailing from Boston originally, Kelly cut his teeth in the ruthless comedy scene there before setting off on the road to spread his sometimes sick and twisted, but always clever, brand of humor all over the world. He has appeared on “The Opie and Anthony Radio Show,” as well as “Tough Crowd with Colin Quinn.” He also was one of the featured comics on the HBO documentary series “Tourgasm,” alongside Dane Cook, Gary Gulman and Jay Davis. He nabbed the opening act on Dane Cook’s sold-out ISolated INcident Tour last year, which had him performing at major sports arenas across the country. He will be seen this June on the new FX comedy series “Louie” with Louis C.K. Check out our interview with Kelly at www.leoweekly.com. —Brent Owen

Kentuckians for the Commonwealth will invade Longest Avenue and Bardstown Road for their second annual Louisville Loves Mountains Day, a fundraiser of sorts for the progressive nonprofit organization — not to mention a good excuse to drink beer and take in live music courtesy of Thomas A. Minor & the Picket Line, Daniel Martin Moore, the Potluck Ramblers and the River City Drum Corps, to name a few. Ramsi’s and Tony Boombozz will be on hand to satisfy your locally conscious pangs of hunger, and the BBC and New Albanian Brewing Co. will provide libations should the state of mountaintop removal prove too heavy a topic to digest on its own. Affrilachian poet Makalani Bandele will read from his work, and all proceeds will go toward KFTC’s efforts to end the practice of mountaintop-removal mining. Win-win. —Jonathan Meador

The people behind the New Albany Bicentennial Public Art Project are breathing a sigh of relief — they’re actually beginning to see results. This year is the start of their four-year project featuring five new public artworks per year through New Albany’s 2013 bicentennial. The artists for 2010 are Leticia Bajuyo, Valerie Sullivan Fuchs, J. Daniel Graham, John King and Brad White.

The project kickoff location is at the Carnegie Center for Art & History. After the introduction, the artists will stand alongside their sculptures and discuss their work. Art Walk participants also will get to hear local historians flesh out the story of each of the sites. There is a free walking tour booklet with map and artist information available. The rain date is Friday, June 11. —Jo Anne Triplett

“Just Say Know” is a one-man show written by a local performer known simply as De Blenniss. De Blenniss is a figurative jack-of-all-trades when it comes to comedic performance — he has done stand-up, improvisational and sketch comedy all over the country. “Just Say Know” is a stand-up/multimedia comedy performance that tackles the generally heavy topic of the war on drugs. Using factual information, De Blenniss will be educating as well as entertaining with the facts and myths surrounding Nancy Reagan’s far-reaching crusade. Next month, the comic will be taking the show to The Fringe Festival in Cincinnati — but before he goes, he wants to run a few practice shows. Catch him this weekend at Jet A Studios on Main Street, and tell him how you really feel. —Brent Owen

The other side of the river owns this weekend: Eileen Jewell, Uncle Monk, The Subdudes, Carolina Chocolate Drops — slated for a “Live Lunch” performance on the strength of its killer Genuine Negro Jig — Loudon Wainwright III, Asylum Street Spankers, The Tillers and Kristin Detor perform in the home of high-speed boating. Earlier this year, Detor was chosen to be a part of the Darwin Songhouse in Shrewsbury, England, joining seven other songwriters at a retreat to celebrate the 200th anniversary of the birth of Charles Darwin. Tickets on sale at www.visitmadison.org/store/event-tickets. —Mat Herron

The Crane House’s Lonna Versluys is all about Asia. “If you look at what’s going on in the world today, not from a historical point but from where we are today, Asia is becoming very important to us as a global partner, and it’s important for us to understand our partners.”

The Asian Cultural Festival celebrates its 16th year on Saturday, providing us with a bit of knowledge and entertainment centered on Asian cultures — from Laos to Turkmenistan (the obvious favorite of all Asian territories). As per tradition, the Speed Art Museum will play host to the festival, giving plenty of room for exhibitions. Booths reppin’ Japan, Cambodia, India and the Philippines will serve as an informational outlet between the abundance of dance, theater, cuisine and art projects. Last year, more than 1,100 heads were counted … can this year beat it? —Jess Mahanes

‘From Nick With Love’

This concert remembers Nick Wiesen — who committed suicide last May at age 26 — in an effort to prevent others from taking the same path. Organized by family and friends, the concert features Thomas A. Minor & the Picket Line, Relic, The Bad Reeds and Bad Blood. Nick’s mother, Bobbye, says all donations will benefit the American Foundation for Suicide Prevention. A silent auction gives you a chance to win a one-week stay in a Florida condominium, a day of handyman services, original art or a trip to the salon. Bobbye says she and fellow organizers chose a music event because her son was a music lover who was learning to play bass guitar at the time of his death. She is hopeful the event will be a way for family and friends to turn their grief into something positive. —David A. Mann

Saturday’s world premiere brings five years of production to a close for what amounts to Louisville’s greatest independent statement yet. Chicago, Washington, D.C., and Portland were the first three indie scenes captured in “Burn To Shine,” a series that films live performances by bands in soon-to-be razed houses. Curated by William Benton (Lucky Pineapple, Phantom Family Halo), directed by Christoph Green and co-produced by Fugazi drummer Brendan Canty, BTS4 features performances by Shipping News, Ultra Pulverize, Magik Markers and many others in a Southern Indiana home on the verge of collapse. Added bonus: Rachel Grimes, Bonnie “Prince” Billy & the Cairo Gang and Liberation Prophecy are scheduled to perform at the Kentucky Center. No details yet on when the DVD will be released. —Mat Herron

Local love will certainly be lofting through the air on Sunday at the Buy Local First Fair at the Water Tower. Hosted by the Louisville Visual Art Association, Grasshopper’s Distribution and the Louisville Independent Business Alliance, the fest will feature live music, a farmers market, arts and crafts, a plein-air painting competition, food, beer and even a “latte art” competition (you know, the cool designs some baristas put on top of your coffee drink). In fact, more than 140 booths will be touting local goods and services all afternoon. Best of all, the fair is free, with a $2 parking fee per carload. Think of it as St. James Jr., with only local vendors and lots more room to breathe and browse. —Sara Havens

Who is Brian McLaren? The author of “A New Kind of Christianity” is a leader among progressive evangelicals who are challenging the theological orthodoxy of the religious right. Time magazine called him “one of America’s 25 most influential evangelicals.” The Washington Post recently wrote this of McLaren: “a guru of ‘emerging church,’ a grass-roots movement among young evangelicals exploring new models of living out their Christian faith… McLaren, 50, offers an evangelical vision that emphasizes tolerance and social justice.” Southern Baptist Theological Seminary President Albert Mohler, though, told NPR he considers McLaren’s views “a shot to the heart of Christian beliefs.” Decide for yourself: Hear McLaren Sunday at St. Matthews Episcopal Church. Co-sponsored by Highland Baptist Church. —Robin Garr

Thank goodness for people with vision, pun intended. The University of Louisville has one of the finest photographic archives in the country, with almost 2 million images, and it’s all because of Robert Doherty.

It all started back in 1959 when Doherty was a professor of photography. He started collecting such gems as the personal archive of Roy Stryker, director of the 1930s Farm Security Administration Photodocumentary Project. U of L’s photo archives hit the big time with this collection. Doherty left the university in 1972 to become director of the International Museum of Photography at the George Eastman House. He’s now back at the U of L photo archives as they celebrate their founder with an exhibition of his own photography, plus images from the collections he acquired. —Jo Anne Triplett