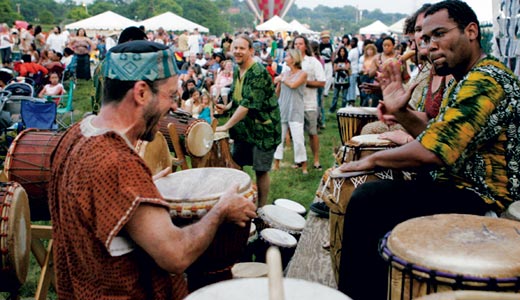 Sometimes all it takes is one voice to delineate an intricate sketch of human experience, with all of the joy, sorrow, sin and humor we encounter daily scribbled in. The Necessary Theatre’s latest piece follows one man down the road to forgiveness and grace, while looking at family and community and how that one voice may become lost. Under the direction of Necessary Theatre company member Laurene Scalf, Robert McFarland navigates Martin Moran’s one-man show through the waves of childhood, Catholicism, desire and human trespass. According to Scalf, the play, winner of a 2004 Obie Award, “illustrates how complicated trespass can be — for the sinner and for the sinned against — and how grace can assert itself despite us.” —Jane Mattingly

Has it been six years? Abbey Road on the River, this year sponsored by WHAS, is back with less focus on Fab Four, more on 1960s and ’70s rock, for better or worse. Old favorites return: Hal Bruce and All You Need is Love, Britbeat and the singing competition, “They’re Gonna Make a Big Star Outta Me.” The controversial twist comes in the screening of “Let Him Be,” a movie about two film students who think they might have proof that John Lennon faked his death. It all happens down on the Belvedere and at the Galt House beginning at 11:45 a.m. on Thursday. Different ticketing packages can be found at the festival’s website. —Kevin Gibson

Renegade development? More like organic. Icebox Co-Labs is a creature of co-working, which emphasizes collaborative, sustainable spaces for artists, graphic designers, musicians and other independent professionals. Founded by John Wurth and Frankie Steele, Icebox premieres Friday as a 3,000-square-foot oasis, and its space can support up to 22 workers. Plus a ping-pong table. Visual artist Brad White curates “Chopped and Channeled: Hot Rod influence on Contemporary Art,” the kick-off to the Fifth Beatersville Car and Bike Show, then Dangerbird, Bad Blood and Solid Rock It Boosters will leave your ears buzzin’. —Mat Herron

The As Yet Unnamed Theatre Company continues its 13th season with Samuel Taylor’s “Sabrina Fair,” a Cinderella story with a quick wit. It’s the story of young Sabrina Fairchild, daughter of a chauffeur, who falls in love with the playboy son of a wealthy family. But after traveling the world and realizing her passion for life’s many experiences, she falls for his brother. It’s full of the flying witticisms that used to be a staple of the Broadway stage and makes for a charming show. This play inspired Billy Wilder’s classic film “Sabrina,” starring Audrey Hepburn, Humphrey Bogart and William Holden. —Laura Morton

It’s time for an old-fashioned brawl, all in the name of fun and bikes. The Mods and Rockers were two British youth subcultures in the early ’60s who just couldn’t get along. One group, the Mods, included trendy fashionistas who jammed to pop music while polishing up their Italian scooters — think hipsters on mopeds. The other group, the Rockers, consisted of badass motorcycle dudes who donned black leather and enjoyed beating up the clean-cut Mods. The Nachbar is hosting a party for both — no matter where you fall on the spectrum. Bands include Thee Flying Carpets, Cougar Express, The Ladybirds and Trophy Wives, to name a few. There’ll be food, bike competitions, raffles, a book signing by “Big Sid” and hopefully little violence, all in good fun. A percentage of the sales will be donated to St. Joe’s Orphanage. —Sara Havens

A sizzling celebration of unity and creative joy, The Sirens’ Chasin’ the Sun CD release party promises a feast for body, mind and soul. The duo blends spoken word, hip-hop, folk and soul-stirring lyrics that will have you dancing on the ceiling and laughing until you cry. The evening begins with spirit-thrilling enchantment from Heartbeat Drummers and Hoop Collective. Seating is limited for an evening that’s about more than a rockin’ good album — it’s about a movement. —Holly Clark

Be careful what you suggest to Glen Hansard and Marketa Irglova. Upon learning that the two invariably toss a city-specific cover into their set, a Broward (Fla.) Times reporter suggested the duo, known as The Swell Season, recast K.C. & the Sunshine Band. Hansard responded, “You’ve just given me an idea.” Given Kentucky’s roots-meets-rolling-hills geographic kinship with Hansard’s native Ireland, no telling what the pair will bust out, but it’s safe to assume some of it will be from October’s Strict Joy, their follow-up to the Oscar-winning soundtrack for “Once.” Stay tuned for news on Hansard’s other group, The Frames, which is celebrating 20 years. Joe Manning handles opening ceremonies. —Mat Herron

Yeah, we all know about Abbey Road, it’s going to be fantastic. But be sure to factor in quality time for the corresponding reggae and Jamaican ethos. Trade in the conceptual guitar and jams for percussion and beats that encourage dancing, the freshly washed hair for dreadlocks and the fish and chips for some spicy jerk. We Louisvillians are nothing if not cultural chameleons. The three-day event is family friendly, inexpensive and insightful to a genre that you’re not often exposed to below the Mason-Dixon Line. Based on the previous 12 years, it’s a proven success as a place to bring the kids (free admission for 10 and under) and a Rastafarian color palette. And just think, with the Ohio Valley humidity, all you’ll have to do is close your eyes and listen to your surroundings, and it will practically feel like you’re in Jamaica jamming out with the locals. —Jess Mahanes

Spring has sprung, and with the abundant flowers and foliage comes the outdoor art to be displayed in it. Yew Dell Botanical Gardens knows the two go hand in hand — they’re on their third annual garden sculpture show.

The 47 sculptures for sale are set among their lush 34 acres. The works by the 20-plus artists were created in ceramic, glass, stone and metal. Executive director Paul Cappiello says the show is “a way of building a bridge between gardeners and great artists and to foster an ethic that considers garden art not an uncommon surprise, but as an essential element of any well-appointed garden.”

His name is synonymous with bass: Producer, arranger and singer Victor Wooten keeps a quiver of low-end theories on hand to dispense at will. A longtime collaborator with Bela Fleck’s Flecktones, Wooten is a five-time Grammy winner whom Bass Player magazine named bassist of the year three times. He grew up in a military family as the youngest of five musically inclined brothers. After being sold to Busch Gardens’ promoters as a fiddle player — he’d never even touched it — Wooten stayed for years before moving to Nashville in 1988. His 1996 debut, A Show of Hands, is widely considered one of the most influential, bass-driven documents of all time. Wooten’s band, to say nothing of his digits, talks Sunday. —Mat Herron

Have you ever been absolutely fascinated by glass? Yeah, me neither — that is until I got an e-mail about this exhibit. I sat thinking I was sent a picture of an actual octopus. Then I realized it was a piece of glass shaped to look like the eight-legged beast. Andrew Jackson Pollack and Jennifer Umphress are both responsible for the intriguing manipulation of glasswork, which will open the Louisville Visual Arts Festival.

The exhibit will be in town all summer at Kaviar Forge. The gallery also will host a reception (from 6-9 p.m.) on June 11 for the artists and their display, also serving as a feature of the Glass Art Society Conference. It’s hard to come across art this realistic and tangible, so I’d advise taking advantage of the fact that it’s coming to you. —Jess Mahanes

Andréa Stanislav is showing us we have had it both ways far too long. Her 17 new works in “Darkness Doubled” continue her exploration of utopia, as well as its dark twin, dystopia. “There’s an irony in man’s attempts to achieve the ideal being mapped out through trails of carnage and destruction,” says Stanislav. “My work is a synthesis of images and events, mined from pop culture and visual art movements from the second half of the 20th century, that explores the failure of utopian impulses.”

Her polymer, glitter and vinyl works reflect the viewer, a feature Stanislav loves. This interaction places you squarely in the moment, hopefully revealing multiple meanings. 21 C recently purchased her 60-piece “The Last of the Real Fucking Men.” —Jo Anne Triplett