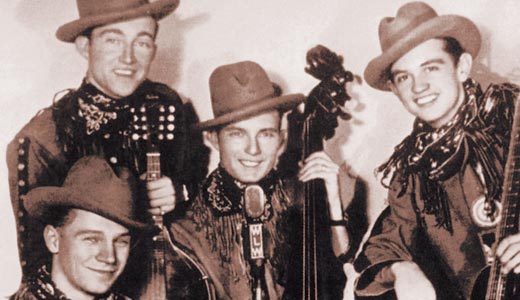 It’s Shakespeare season at Walden Theatre, and this year’s lineup features a romantic comedy, “Love’s Labour’s Lost”; a tragedy, “Timon of Athens”; and a historical work, “Henry V.” This annual festival is the first and largest of its kind, always presented for and by young people. But it doesn’t matter how old the actors are or how dated the material might seem — Walden Artistic Director Charlie Sexton points out that Shakespearean themes “cover the spectrum of human experience.” So whether you need to redeem yourself intellectually after losing a few brain cells to Derby debauchery, or want to see teenagers battling one another and looking for love sans sparkly vampires, or you’re just in the mood for high-quality theater, then get thee to the Victor Jory. —Jane Mattingly

You’ll remember Colin Mochrie and Brad Sherwood as cast members on ABC’s Emmy-nominated improv show “Whose Line Is It Anyway?” hosted by comedian Drew Carey. If you enjoy the wacky, off-the-cuff sense of humor that evolves organically while performing without a script, then this promises to be a night of a million laughs. Twenty years ago, both men trained with the world famous improv group Second City, the same troupe that launched comedy greats Steve Carell, Tina Fey and countless other “Saturday Night Live” alumni. On Friday, Mochrie and Sherwood will perform at the Brown Theater, giving a performance reminiscent of “Whose Line Is It Anyway?” They’ll play some familiar games and do some fresh bits, but since it’s mostly improvisation … no two shows will ever be alike. —Brent Owen

Philly tested, My Morning Jacket approved ensemble Dr. Dog acquiesced some self-reliance and took on producer Rob Schnapf (Beck, Elliott Smith) for “Shame Shame,” but their core sound remains. The follow-up to 2008’s Fate feasts on high-definition barbershop harmonies, spiced up with California soul and carnival-esque grandeur. “Everything we’ve ever recorded up until this point, the song itself is written, but the instrumentation is up for grabs,” says Toby Leaman. “But with this record, Rob really wanted to frontload stuff, not just throw down any old track to get it started.” Adding to the rock revue is Rhode Island’s Deer Tick. —Mat Herron

Remember when nerds went from being outcasts to valued members of society? Well, this work is set before that shift occurred. The title nerd of “The Nerd,” the Broadway hit comedy of 1987, which will be presented by the Youth Performing Arts School, is a genuine nerd, right down to his job as inspector in a chalk factory. The only break the guy gets is having the regular name of Rick Steadman — he is surrounded by people with names like Willum and Clelia and Tansy and Thor. The play’s major problem is Rick comes to visit Willum and forgets to leave. It’s all set in ultra-hip Terre Haute, Ind. —Bill Doolittle

Hound Dog Press has succumbed to the magnetic pull of East Market Street. Their relocation opening will take place during the May 7 First Friday Trolley Hop. So you can better understand the art of letterpress, they have two exhibitions featuring the old and the new. On display are facsimiles of some of the “biggies” of letterpress, like the Gutenberg Bible. As the first book ever printed with moveable type, it qualifies as one of the most famous works of Western civilization.

With the advent of spring, the River City has re-emerged from its winter chrysalis to witness once more the perennial fixtures of Gaia-worship, which is why the upcoming, third annual Earth Day Hootenanny should be your one-stop shop for all things tree-huggie. Sponsored by the tri-state eco-umbrella organization Mighty Kindness, the festival will feature an array of Hacky Sack-friendly activities, as well as a community film fest, green workshops, music and dance, yoga sessions, plus the awesomely titled “Massage-a-thon,” courtesy of the Louisville School of Massage. Also in attendance will be representatives from Heine Brothers Coffee, Rainbow Blossom and that pony-tailed guy who smells like patchouli and talks about compost all the time. —Jonathan Meador

Morris “Sleepy” Marlin was one of the best-known fiddlers in the United States and Canada for more than four decades. On Saturday, he will be honored by local musicians with a concert at Highland United Methodist Church that will benefit Highland Christian Ministries. The concert will feature performances by Whistlin’ Rufus as well as the Bluegrass Messengers, and will feature special guests including Jace Marlin (Sleepy’s son). Sleepy Marlin moved to Louisville in 1948 and joined the WHAS house band, which featured Randy Atcher. He was a regular on one of the station’s most popular shows, “The Hayloft Hoedown,” in the 1950s and ‘60s, and would go on to win countless fiddling competitions and continued to perform into the 1970s. Sleepy Marlin will be on hand for the concert, and donations will be accepted. Just so you know, it’s worth a few dollars just to hear some of Sleepy’s jokes. —Kevin Gibson

‘What My Hands Have Touched’

Before writing “What My Hands Have Touched,” the founders of the Looking for Lilith theater company interviewed dozens of American women who had a part in World War II, whether it be as nurses, pilots, factory workers, U.S.O. performers or homemakers. These brave women shared their stories of the sorrows and realities of wartime. The play, which premiered in 2003, is about a group of female friends during WWII and sheds light on an often-overlooked part of history. It stars Lilith founders Shannon Woolley, Trina Fischer and Jennifer Thalman Kepler and takes place one night only — Saturday at The Rud. —Sara Havens

Psych-punk/experimental pop quartet Stardeath and White Dwarfs will play Glassworks’ rooftop concert Saturday night, and it may be one of those shows you’ll only get a chance to experience once in a lifetime. The band’s reputation for its trippy stage show combined with the Louisville skyline? Yeah, worth a look. SDWD has been touring with the Flaming Lips and will join the Lips onstage this year at Bonnaroo to perform Pink Floyd’s Dark Side of the Moon in its entirety. The two bands collaborated to record the seminal album for a 2009 online-only release that was dropped last month as a special vinyl package. Louisville can help Stardeath get warmed up for the big Bonnaroo blowout later this summer; chances are, we’ll get one helluva a sneak preview. Local rockers Phantom Family Halo get things rolling. —Kevin Gibson

The Norton Commons neighborhood in east Louisville plays host to its inaugural Arts & Crafts Show Saturday and Sunday, featuring dozens of artists from Louisville and around the country, including photographer Randal Napier of North Dakota, Louisville painter Maria Napoli and North Carolina-based jewelry maker Sara Westermark. The show, which will be held at the Town Center, coincides with the Norton Commons Welcome Home Tour, wherein visitors can ride a trolley around the neighborhood to tour homes. In addition, art will be displayed in the tour homes, and attendees can vote on their favorites. The contest winner gets a $2,000 prize. —Kevin Gibson

Take piano jazz chops and rock rhythms, mix fascination with electronic gadgetry, add a distinctive sense of style, and you have Marco Benevento. He made a name for himself with the Benevento/Russo Duo, and now is concentrating on his solo career and his work with Garage a Trois. He returns to Louisville accompanied by Ween bassist Dave Dreiwitz and Ani DiFranco drummer Andy Borger in support of Between The Needles & Nightfall, which drops nationally the day of this show. The disc layers on evocative melodies. In a recent performance at Jazzfest, Benevento showed smart pop sensibilities and wide-ranging dynamics, enhanced by risk-taking improvisation and excellent communication with his bandmates. Fans of adventurous music should check this out. —Martin Z. Kasdan Jr.

The Tim Faulkner Gallery has work by three diverse artists on display throughout May.

Dan Rhema is a self-taught artist, but that is only the start of his intriguing life story. Trained as an international development worker, he contracted dengue fever that developed into spinal meningitis. The final diagnosis was severe brain injury that ultimately turned him into an artist. He started painting and making found object sculpture to recreate his dreams and near-death experience.