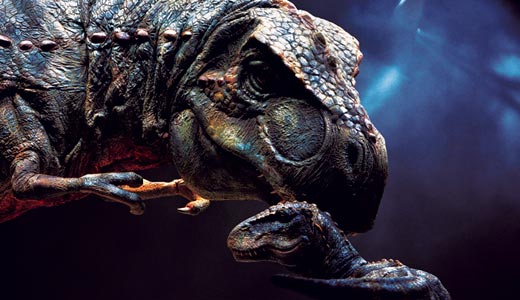 The early punks in London were paragons of artistic purity, right? Guess again, Sherlock. Often they were pub-rockers who shifted their sound because it fit the mood at the moment when they called the music industry’s bluff. You can have a great sampling of the real deal at Skull Alley on Friday night, courtesy of The Bermondsey Joyriders. The leader of this trio is Gary Lammin, whose bona fides starts out with drinking alongside Malcolm McLaren — then on to playing guitar and writing songs for Cock Sparrer, through collaborations with Joe Strummer and Alison Moyet. Nowadays, unless he’s playing a bit of blues, his group’s sound is balls-out and filled with rough-hewn basic joy. A song like “Football” puts them right between AC/DC’s tongue-in-cheek anthemizing and the great guitar-driven, self-bemused fun of The Faces. The Parlor Tricks and The Empires also are on the bill. —T.E. Lyons

By night, Alexandra Brannon works the graveyard shift at UPS as a package sorter. By day, she dances her ass off as a student of the University of Louisville’s Dance Academy, which will be hosting its annual Spring Gala — as well as Brannon’s own ballet, “The Give and Take” — this weekend. The event is dedicated to the late WHAS radio personality/LEO columnist Francene Cucinello, who was a board member of the academy, which has created a dance scholarship in her name. Expect lots of pirouettes and tights. —Jonathan Meador

Now that the Cardinals have evacuated the building, Freedom Hall is welcoming some bigger and badder company to fill the void. Seventeen life-size dinosaurs are invading Louisville’s turf in “Walking with Dinosaurs,” a theatrical arena show inspired by the BBC television series. For all you dino geeks out there: 10 species are represented from the 200 million-year reign of dinosaurs, including the T. rex, Stegosaurus and Brachiosaurus, which is 36 feet tall and 56 feet wide. The show depicts the creatures’ evolution — complete with the climatic changes that led to their demise. There will be blood, there will be violence and there will be moments of complete terror, but it is billed as a show for all ages. Who doesn’t love dinosaurs … besides your average creationist? —Sara Havens

The plant world has taken over this spring, and it seems every plant in Kentucky is doing its blooming best to burst forth in color – including the stemsters of Bernheim Forest, where the annual BloomFest is scheduled for Saturday. The Spring Plant Sale begins at 9 a.m., with a Bloomin’ Brunch starting at 10. Visitors may consult with gardening experts at Garden Dreams, with children invited to the Woodland Faerie Village, where a number of games and activities for kids are planned. Exhibitors and experts manning booths include the Kentucky Native Plant Society and the Kentucky Bluebird Society. One thing to learn more about is geocaching, a popular new over-hill-and-dale, seek-and-find game. Regular attractions available include Bernheim’s Nature Discovery Stations and the Canopy Tree Walk. But watch out for those plants – they’re growing! —Bill Doolittle

Dark Side of the Rauch

Echoing Syd Barrett: Neptune, Titan, stars can frighten. Dig out your Dark Side of the Moon T-shirt from the bottom of your dresser drawer and venture to Rauch Planetarium Saturday night. Pay special attention to the small logo on the back, between your shoulder blades, the one that reads “Pink Floyd — Still First in Space.”

In a first-of-its-kind event, Louisville tribute ensemble You Crazy Digmond will play the 1973 album live in the planetarium to a themed laser show. A second live Floyd set takes place alongside futuristic software that compiles images from satellites, telescopes and observatories into a first-person spaceship voyage across the known universe. Barbecue and BBC beer will be available before, and Scott Mertz and Steve Cooley play during intermission. —Joshua Coffman

Have you heard VOICES of Kentuckiana yet? Well, be advised: This is not your basic chorus. VOICES is one of the area’s most talented, spirited and community-oriented choral groups, singing their hearts out since 1994. The chorus provides opportunities for lesbians, gays and supporters of the LGBT community to perform music that is meaningful for all audiences. There is one word that can describe a VOICES performance: uplifting. On Saturday, they will merge with Nashville’s 90-member LGBT chorus, Nashville in Harmony, to celebrate a night of some of Britain’s best music. We’re talking The Beatles, Queen, Elton John, Andrew Lloyd Webber and more. All you need is a ticket for “All You Need is Love.” —Pam Swisher

The locally produced WonderFest, aka Millionaires Row for geeks, is celebrating its 21st year with some big-name scary people and the people who make scary people. Among the guests at this year’s sci-fi hobby show are The Incredible Hulk himself, Lou Ferrigno; “Return of the Living Dead” stars Linnea Quigley and James Karen; Nimrod Antal, the director of this summer’s “Predator” sequel; designer John Eaves (“Iron Man 2”); and Peter Jurasik from “Babylon 5.” Along with the celebs, there will be a model-making contest, an exhibit area and lots of chatter of monsters, aliens and zombies, oh my!

“I’ve loved building models since I was a kid, and WonderFest is our way to keep the childlike sense of wonder alive,” says WF CEO Dave Hodge. We hear there’s free admission for the undead. —Sara Havens

Manual High School students Evelyn Gallagher and Kate Miller prefer to work for organizations that perhaps most people haven’t heard about. Their current project centers on Love146 — a new organization that rescues and rehabilitates young girls who have been victims of human trafficking. “I hear about young people in situations around the world and think that somebody has to do something,” says Gallagher. “I realized that, even in a small way, I can do something.” She and Miller have put on benefit fashion shows before, but this time they’re taking it a step further. The event they’ve come up with, appropriately titled LoveVille146, is part fashion show, part art show, part silent auction, and will feature local artists, designers and boutiques. All of the art as well as items from local vendors will be auctioned off, and all proceeds will benefit Love146. Food, drink and Heine Brothers coffee will be provided. —Jane Mattingly

This rain-or-shine feast of what has been dubbed “Jewish soul music” features The Java Jews, Cincinnati Klezmer Project, River City Klezmer Band with cantorial singers David Lipp and Sharon Hordes. Ashkenazic Jews in southeastern Europe adopted klezmer — a hybridization of “kley,” meaning instrument, and “zemer” — from traditional Romanian music. The genre’s celebratory tones often filled wedding halls as Jewish immigrants spread its popularity in the United States from the 1880s through the early 1900s. In their day, klezmer’s practitioners were renegades: Most synagogues frowned on klezmorim because of their secular lifestyle, which included gigs at Christian services and with military bands. Venerated composers Leonard Bernstein and Aaron Copeland, who incorporated elements of the style into their work, were less prejudicial. —Mat Herron

This is the second time the Kentucky School of Art has scheduled Judy Pfaff to speak at 21c — the first was canceled due to weather. So all are holding their collective breath until the plane touches down. Pfaff is well worth the wait. The internationally known artist is famous for the installations she has been doing since the 1970s. Her site-specific mix of sculpture, painting and architecture creates spaces that are both 2-D and 3-D at the same time.

The lecture is free and open to public. There is a “meet and greet” with Pfaff following her talk. —Jo Anne Triplett

Singer-songwriter Josh Ritter makes a stop at the Brown Theatre as he works his way across the states in support of his new album So Runs the World Away, released last week by Pytheas Recordings. Ritter cut his teeth hanging out with Glen Hansard of the Swell Season in Ireland; over the last several years, he has built up a strong following with his Americana storytelling set to music. Ritter has an interesting songwriting voice that draws from historical and literary influences — a college “American History Through Narrative Folk Music” major (he made that up himself), he lists writers like Flannery O’Connor and Philip Roth as influences, and the title So Runs the World Away is Shakespearean. Ritter said he sees the songs on his latest record, his sixth, as “pictures painted in oil on large canvasses. … I love writing, and this was the most fulfilling record I’ve yet written.” —Kevin Gibson

PYRO Gallery’s Invitational exhibition features art by some oldies-but-goodies as well as a few relative newbies. This mix gives viewers a cornucopia of delights. There is nothing like seeing work by an artist you admire as well as discovering a new one, and it’s all in the same place.

The 21 Kentucky artists have diversity in media as well, such as ceramics by Sarah Frederick, Arturo Alonzo Sandoval’s textiles and paintings by Jamie Corum. The gallery also is featuring Cuban painter Victor Manuel Velasquez. He is so new that the PYRO Invitational plus the current show at the Graciela Perrone Art Gallery are his first exhibitions in the United States. —Jo Anne Triplett