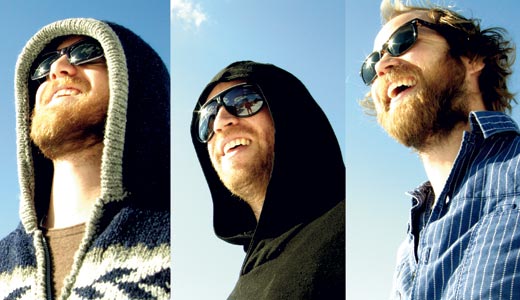 If it’s true that great artists steal, Lain Carney could be destined for fame. Rest assured, that quarter-inch reel-to-reel TEAC machine he absconded with from college is being put to good use in bucolic Warrenton, Va.

There, inside the 10-by-14-foot home studio, Lain and brothers Van and Jennings captured Living, the trio’s fourth self-produced album. Recorded live except for the vocals, the 12 tracks echo Melvins (“Lemon Lady”), Black Mountain (“Young”) and The Black Keys (“This Is Living”), as well as Pink Floyd’s timeless acoustic strums (“Virgin Guest”).

A series of regular appearances two hours north in Baltimore found them sharing bills with Arbouretum. The two acts became fast friends, and in 2008, recorded Kale, a seven-song collection of John Cale covers, for Arbouretum’s label, Thrill Jockey. Label founder/owner Bettina Richards liked what she heard and signed the band in time to release 2009’s Maker.

Pontiak spent almost all of March in Europe, their downtime periodically disrupted by French and Swiss border guards fruitlessly searching for dope. “We always get searched, and we must be one of a handful of bands that actually never has any drugs on them,” Lain says, switching into a faux French accent. “You have a little bit of, eh marijuana? Just give us the marijuana. It’s like, ‘We’re gonna bring a dog out.’ Cool, bring a dog out, I’m gonna pull out my book and start reading.’”

For brothers Carney, reading one another has been a process of evolution, not only creatively but also personally. All are close in age and grew up playing music together. “Touring throws you together with people in close proximity, and that can be tough if you don’t have a working relationship that’s professional, ” Lain says. “That said, they are my brothers, so we do cross that professional boundary: ‘You had one more slice of pizza than me, and that’s fucked up.’ We try to keep it on the bright side. It’s way more productive to listen than to lecture.”