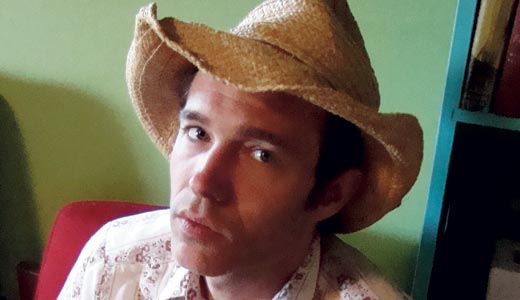 The late BBC DJ John Peel only played two albums in their entirety on his show. One was Bob Dylan’s Desire, the other was The Cowardly Traveller Pays His Toll by Simon Joyner.

Called the godfather of Omaha’s music scene, Joyner earned that title thanks to weekly performances at Kilgore’s coffee shop in midtown Omaha. Those shows left people like Conor Oberst and other folks enamored and cemented Joyner’s legacy as a lasting influence. Since 1993, Joyner has released more than a dozen albums for Secretly Canadian, Jagjaguwar and now Team Love.

For this current tour in support of Out Into the Snow, Joyner is backed by The Parachutes, featuring members of Lambchop and Omaha’s Bear Country, and will perform in unconventional venues.

“I didn’t enjoy touring,” he says. “But I do realize that I enjoy playing these occasional shows where someone will ask me to play a house show or art gallery. Those shows were a little more intimate, and I really enjoyed the connection I had with the audience rather than being up on a platform in the dark.”

Blue River tribute
Tyrone Cotton, Los Luddites and Big Poppa Stampley are among a slew of performers Saturday to pay tribute to the Blue River Café. A fire destroyed the Milltown, Ind., venue. Music begins at noon at the site of the club. In the event of rain, the show will take place at Blue Heron Gallery, across the street from where the Blue River Café stood.

Gypsies in the city
Sunergos is hosting a monthly series featuring singer-songwriters and acoustic-based ensembles. At 7 p.m. Saturday, that formula turns on its head when New York’s Gypsy Nomads arrive. The act combines French, folk and cabaret with live instrumental loops and seductive percussion. Hear it for yourself at www.thegypsynomads.com.