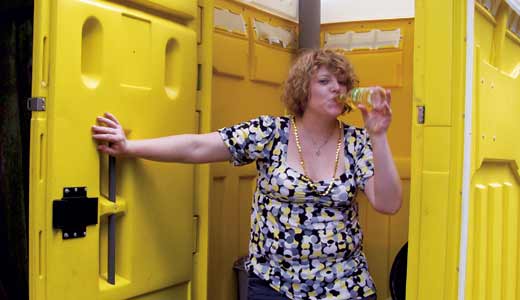 So it’s Derby week, which means hangovers are acceptable at work. I have one right now, actually. Went to see the Velcro Pygmies last night at the Chow Wagon while the rest of Louisville was either seeing En Vogue or Wax Fang. We stopped by Harley’s Main Street Tavern for a bite to eat … you know, trying to avoid corn dogs at all cost. So I had some barbecue and a pint of Jagerbomb. My liver is starting to spot.

Well, I managed to piss off the mayor once again during the Great Steamboat Race. I rode on the Belle of Louisville again and brought along a video camera and Hannah Montana mic, although no one at LEO knows how to edit said video. Pretended everyone on the ship was a celebrity, for my own amusement I guess — something to pass time between bourbons. So when I got the mayor’s attention, I turned to the camera and introduced him as John Yarmuth. He was not amused. The guy who looked like Willie Nelson was more than happy to play along, though. He even announced his candidacy for mayor. Hungover again.

I am fully aware that last night was the night to party in Louisville. In fact, the bars don’t technically have to close. So why was I passed out by 11 p.m.? Because I ran out of Red Bull, of course. Enjoyed an afternoon pint at Cumberland Brews until drunken frat boys interrupted my bliss. They were from Chicago by way of Jersey, so I suggested they go to the titty bar Connection. Finished the evening at Deb and Linda’s, where I stalked the cheese tray and pilfered the M&M bowl. Tried to have an intelligent shot with Laura Shine, but the bartender gave us something Mickey Mouse would chase a Shirley Temple with. All in all, hungover again.

Just woke up. Forgot how much fun a 12-hour bender can be. Started at Beth and Elizabeth’s, where they had a real live bookie. As usual, my Jell-O shot consumption was more successful than my betting. That damn Ice Box came in second. Also became intimate with another cheese tray, as well as hooch, beer and mint juleps. Tried to have an intelligent shot with Laura Shine, but I forgot where I left her. Drunk texted my mom and then took a much-needed nap before the Down & Derby party at the Water Tower. For some reason, I thought Red Bull and vodka was the perfect drink(s) to end the night. All I recall is a blur of dancing drag queens, a photo booth, a naked man pouring shots down throats and a corn dog. Now I’m awake with realizations of canker sores raving in my mouth. Hungover … again.