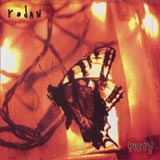 Once “Shiner” and “Tooth Fairy Retribution Manifesto” started popping up on locally released compilations and singles, it became clear that Jason Noble, Jeff Mueller, Tara Jane O’Neil and Kevin Coultas were the best hope for aiding and in some cases redirecting Louisville’s postpunk transition out of the early ’90s. Though there are thematic comparisons to their brethren in Slint, Rodan’s 1994 LP is even more of a compositional steroid. The stuttering guitar work in “Shiner” sounded like this weird intersection between math-y freneticism and blues boogie, but it’s the 11-minute octopus “Everyday World of Bodies” that fans not only return to, but also cannot get enough of.