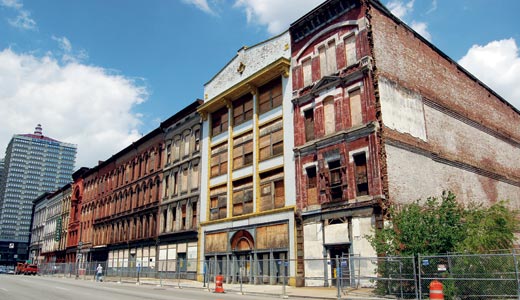 A herd of pedestrians is gathered in front of the Iron Quarter on Main Street, waiting to sign a petition aimed at salvaging the row of historic cast-iron buildings that have recently come under threat of demolition.

Preservationists fighting to protect the 19th-century structures are peddling their petition in conjunction with the First Friday Trolley Hop. So far, it appears most of the trolley-hoppers approached are equally as opposed to tearing down the buildings.

“There’s real history here, and not just for downtown, but for the whole community,” says Stephen Porter, a preservationist and attorney who drafted the petitions and helped coordinate the downtown drive. “The same men who were the architects for City Hall and Churchill Downs designed some of these buildings.”

Earlier this month, developer Todd Blue — owner of the Iron Quarter — asked the city for permission to raze the debilitated structures after a private engineer determined they were a safety hazard. Almost immediately following the announcement, a swiftly organized grassroots movement was launched, with preservationists scrambling to file the necessary paperwork with the city to stop Blue and his company, Cobalt Ventures. Mayor Jerry Abramson also has voiced his opposition to demolition of the downtown buildings.

The city Department of Codes and Regulations requires that the preservationists obtain 200 verifiable signatures from residents on seven separate forms, which must then be submitted to the Louisville Landmarks Commission.

“This is an emergency situation,” says Porter, “and we have to hurry up.”

Last week, the Department of Codes and Regulations rejected Blue’s emergency demolition request, saying the structures pose no immediate safety threat. Now, Blue is seeking to raze each of his seven Iron Quarter buildings through the regular, non-emergency application process. Before that process begins, however, the Louisville Waterfront Development Corp., which must approve any major renovation or development project in close proximity to the downtown riverfront, would have to approve demolition.

At this point, it appears Blue and city officials are at an impasse, unable to even agree on exactly what has transpired at past meetings regarding the fate of the Iron Quarter.

A spokesman for Mayor Abramson tells LEO Weekly the administration previously found several individuals interested in purchasing the property and presented those offers to Blue.

But Glenn Cohen, an attorney representing Cobalt Ventures, insists that is untrue, claiming the city has not presented his client with any possible buyers — not that his client would entertain them if they had.

“The city has never lined up any offers from potential buyers to acquire the property. It just isn’t true,” says Cohen, adding that Blue’s concern is the engineer’s report indicating the buildings are a wreck due to decades of neglect long before he acquired the property. “I don’t know who with the Mayor’s Office is telling people that they’ve brought potential buyers, but that is false.”

On the contrary, Chris Poynter, a mayoral spokesman, says Abramson has indeed met with Blue and introduced the developer to prospective buyers.

“The mayor has had discussions with Mr. Blue about alternatives to demolition, and we’re still hopeful that something will change,” Poynter says. “The city itself has never made any offers, but we’ve put Mr. Blue in contact with potential buyers. We have brought people to the table who are interested in that property with or without him.”

Three years ago, Blue purchased the buildings for $4.3 million, with plans for an ambitious $50 million renovation project. The recession, however, stalled prospective tenants and the buildings have remained an idle eyesore ever since.

And though Blue contends the dilapidated structures need to come down, the city continues to highlight a recent report funded by the Downtown Development Corp., which suggests the buildings are salvageable.

Built in the 1850s, the row of cast-iron buildings now known as the Iron Quarter has a rich history, originally serving as distilleries, before being repeatedly reincarnated as various businesses, nightclubs and apartments.

In the second half of the 19th century, builders used the decorative cast-iron facades as inexpensive alternatives to traditional masonry, imitating classical architecture.

“There aren’t many buildings like these left, so we’re very lucky to have this strip,” says Martina Kunnecke, president of Neighborhood Planning and Preservation, a group dedicated to saving local monuments.

The Main Street corridor is home to the second-largest number of cast-iron facades in the world, exceeded only by the famed Soho district in New York City. At least two of the buildings owned by Blue are listed on the National Register of Historic Places, and the other five are eligible for placement on that list.

Concerned about the likelihood of demolition, preservationists believe both the city and Blue (who owns numerous commercial properties, including the East Main Street building in which LEO resides) are equally responsible for the block’s present condition.

They point out that the Abramson administration has a history of failing to aggressively go after wealthy developers who ignore city regulations and destroy historic properties.

Local preservationists are moving forward nonetheless and say they have obtained the required number of signatures to fight demolition of the Iron Quarter. They are hoping fundraisers will generate enough money to cover the $500 fee that must accompany each of their seven petitions.

Once the petitions are submitted, the Louisville Landmarks Commission likely will call a public hearing to discuss the possibility of designating the buildings as landmarks. If the commission grants the Iron Quarter landmark status, it would make the demolition process more tedious, forcing Cobalt to demonstrate economic hardship or that the buildings are a public safety risk.

“These buildings are salvageable, but the longer there’s no resolution, and if Mr. Blue is not held responsible for the maintenance of those buildings, there’s going to be more decline day by day,” says Kunnecke, adding that the city needs to have tougher preservation laws. “If the buildings come down, then we will lose once again one of the more unique structures in the country, and we will lose the ability to say this is a city that values its history.”