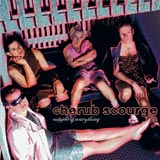 Brent Starkey and his revolving cast of members in Cherub Scourge, which included late drummer Tony Bailey and bassist Rankin Mapother, were pop-punk when pop-punk meant more than just visiting Hot Topic. They shared a certain kinship with the Lookout Records bands of the ’80s and ’90s but employed their own Midwestern twist. Outside of Everything, the band’s third album, shows Starkey skirting the line between snarling and sweet. The band eventually folded in 1999 upon the release of Radio Killers, some of which was recorded live at CBGB’s.