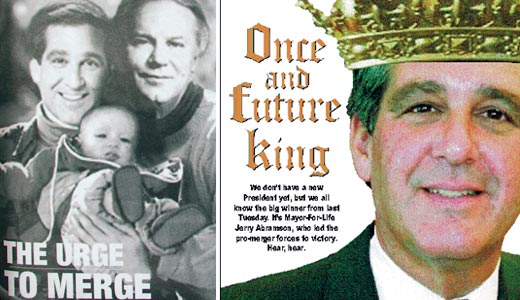 “A succession of mayors have pretty much followed what they thought was the will of the community to preserve a great lifestyle, but there is a widely held concern that we may lose that lifestyle if we don’t develop more Providians* and Humanas.” —Consultant Bill Beam, commenting to LEO about a survey he conducted for the old Board of Aldermen about what was right and wrong in Louisville, circa 1995

As LEO stands on the precipice of its 20th year in business, the city, in many ways, feels a lot like the one we inhabited in 1990.

There are, of course, obvious and significant differences. Papa John’s Stadium was built in 1998, and the downtown arena, an idea mentioned often in early LEO pages, is almost ready. Fourth Street Live transformed the Galleria, and downtown in general has far more going for it.

Politically, there’s one huge difference — in 2000, the groundwork was laid to unify the city and county, and the new Metro government went online in 2003. Now there is one Louisville, led by a strong mayor as the enabling legislation intended, and a 26-person council, an ungainly body that seems a fitting symbol for a seriously stratified city.

So, using the eye test, Louisville is a much different city today. And yet … there are a few good reasons why 1990 doesn’t seem so far removed.

One relates to mindset, how we think and perceive. Though we’re one government, the old narratives about how the city actually works are alive and well.

Another relates to bridges (which, of course, is related to how we think and perceive). There are exactly as many bridges across the Ohio River in Louisville today as there were 20 years ago. That would be three, if you count the ones that actually carry automobiles.

And finally, there’s Jerry Abramson. This city has hardly known life without him at the head of the table since 1985. Despite seven years of merged government, you could argue his continued presence has kept us from experiencing this new form of government in full.

That is about to change. Or so it seems.

When Bill Beam did his survey in 1995, Greater Louisville had two governments. The seven-member Board of Aldermen comprised the city’s legislative body, while Fiscal Court — three county commissioners and a county judge-executive — did the same for the county.

In a LEO story about the survey, Beam told John Yarmuth the results meant Louisvillians would accept far more dynamic action by elected officials than politicos had been willing to pursue.

That seeming lack of political boldness was a common lament in the early days of LEO.

For example, the aldermen futzed around with the Fairness Ordinance, which would prohibit discrimination based on sexual orientation, and the mayor, rather than spend any of his considerable political capital, seemed content to let the legislators mishandle the hot potato. (Perusing LEO’s back issues, I noticed that in August 1992, Editor Yarmuth chided the mayor for failing to take a position on Fairness.)

The aldermen finally passed something in 1998 — after a LEO story detailed an actual case of someone getting fired because of her sexual orientation. (Opponents, led by Dr. Frank Simon, a local anti-gay rights activist and one of the weekly’s all-time favorite whipping boys, had predicted such legislation would create constant lawsuits, lead to hiring quotas and a prohibition on Bible reading, and force the city to build separate restrooms for transvestites. Weren’t those tropes dusted off recently to argue against health care reform?)

Despite merger, our narratives about how the city actually works have scarcely changed. The East End — particularly along River Road past Zorn Avenue — is where the old money and real power resides. The Courier-Journal is part and parcel of that. The South End feels neglected, typecast, misunderstood and underutilized. The West End used to be an integral part of the city, but long ago it’s where we shoved our most serious problems of crime and poverty. And Indiana — well, it’s not even in Kentucky.

Now come two gentlemen who would be mayor. Both are personally wealthy, and it can scarcely be said either comes from outside the box, though you can argue Greg Fischer is of the River Road establishment while Hal Heiner is not.

The question of boldness remains. To Beam’s point in that 1995 survey, Louisville needs jobs. And while small businesses are really the economy’s bread and butter, large, homegrown companies with a national/international footprint such as Humana, Aegon (nee Providian*) and Brown-Forman are integral. They employ thousands here and lead the way philanthropically. Try imagining civic life without them.

But, although Papa John’s and Yum! Brands are two prominent companies that didn’t exist in 1990, Fortune 1000 companies don’t grow on trees. The new mayor, it seems, will be challenged to foster a climate in which it can happen again. He’ll also have to wrestle with crime, education, environmental issues, transportation and a whole list of nuts and bolts.

Beyond that, however, is the notion of changing how Louisville thinks. That seems a far greater challenge.

With Abramson’s successes — there were many — and despite his failures — there were some of those, as well — much groundwork has been laid for a fine Louisville future. Louisville has countless assets — cultural, architectural, historical and a generally awesome coolness — that other cities covet. We seem poised to ignite and go to another level, with our quality of life intact.

But as the old survey hinted, part of our narrative is that we don’t want to grow. Certainly we don’t want to become Atlanta. But if you don’t grow, you die, and leadership sometimes means leading people where they need to go but don’t think they want to.

The bridges conundrum must be solved, though skeptics will point out that even in 1990, no one really thought 2010 would be much different in that regard.

The new mayor will have to show, by example, that the whole city matters. Not just downtown. Not just the eastern and southeastern suburbs. Not just people of means.

And — this may be the one thing that can really transform our thinking — the new mayor will need to think regionally, and help us do so as well. Despite lip service to the contrary, Louisville doesn’t really care about Indiana. Why should it?

Interestingly, both Fischer and Heiner have been involved in “moving” jobs there, and it became a wedge issue in their respective primaries. It’ll be off the table in the general, and one barometer of whether either will model a different way of thinking is this: Instead of cowering from the negative provincial implications, will they talk straight about why having those jobs in Indiana can be a good thing?

Will they have the courage to lead people where they need to go?

And will either candidate go as far as, say, talking about a bi-state taxing authority, which could downplay that provincialism and elevate our understanding of how communities must compete in the 21st century? That would be a truly risky way to think, in the best sense, and the new mayor will hold the cards.

He’ll never get everyone in this city agreeing across the board, and it is foolish to think that’s even desirable. But a strong economy will have folks feeling a lot better about life in general. Loving Louisville, as it were.

There are two choices: the old way or a new way. One will preserve the old narrative, the other can transform it. Which one will it be?

We’ll know more about this conversation over the coming months, but to really see how it all turns out, we may need to read LEO’s 30th birthday issue. Let’s hope the song isn’t the same in 2020.