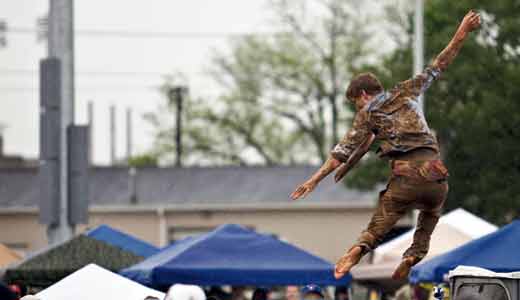 The Kentucky Derby always seemed a world away growing up. I recall hearing tales of the notorious Infield, described by those in the know as an inglorious yet enticing experience. In the past, I steered clear of Churchill Downs, instead spending the first weekend in May taking in the sights and sounds of cruising along Broadway, an unofficial west Louisville Derby event that was unceremoniously shut down several years ago.

This year, I finally ventured into the enclosed underbelly of the country’s most prestigious horserace, and it was a curious adventure to say the least.

I decided to start slowly, testing out the Infield during the Kentucky Oaks. Initially, I found this to be a surprisingly tame and family-friendly atmosphere. The sunshine and cool breeze was a beautiful backdrop, attracting a record Oaks crowd of 116,046.

Through feathery hats, screaming beer merchants and picturesque fillies, I approached the tunnel leading to the Infield without any smell of decadence. For the first few hours, the only sign of indecency unfolded around a semi-trailer carrying the Budweiser Clydesdales.

Apparently, one of the gigantic horses, named “Duke,” got a little too excited, resulting in his 26-inch penis becoming, well, fully engorged. Naturally, a crowd gathered, laughing, pointing and snapping pictures.

“Oh my,” a woman exclaimed, standing next to her child. “That’s unreal.”

“I’ve been kissed by the sun, and bitches love that,” he slurred. “Hey, I like your Derby hat. Hey, where’s your Derby hat? Lemme show you mine.”

Most of the women ignored the man and his equally intoxicated entourage, responding with a dismissive wave or eye-roll. The advances weren’t working until an intoxicated elderly woman, with large glasses and thinning gray hair, approached. The two flirted about their whereabouts after the race before she landed a slobbering kiss.

I had seen enough and decided to call it a day in preparation for the Derby.

On Derby Day, I headed back to Churchill Downs with zero rain gear, covering myself in a simple black hood that soaked in every raindrop. The heavy rainfall seemed to set the mood for the day. By 8 a.m., more than an inch of rain had turned the dirt into a nasty peanut butter-colored paste in the Infield. The soggy mess did not deter Infield revelers, instead encouraging what I can only assume was wilder-than-usual behavior. There was a crowd of teenage girls licking brown muck from each other’s faces, a drunken middle-aged man spilling into a muddy pool, and prowling groups of fraternity boys yelling obscenities.

As the gray and rainy day progressed, so did the debauchery. I stood in disbelief as poor drunken fools raced atop portable piss bowls while being bombarded with beer cans and other objects.

By late afternoon, I had seen more than enough of the Infield to last a lifetime. Hoping to avoid the traffic, I departed — before the actual Derby — just as the rain took a brief break and the squishing mud oozed from my sneakers. I got home just in time to watch the 136th running of the Kentucky Derby on television, in peace.