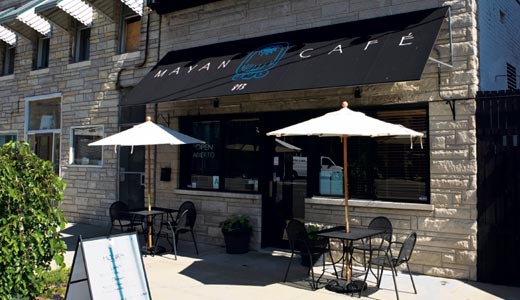 Ah, nostalgia. There’s hardly a better way to get a room full of foodies chattering, in real time or Internet time, than to start a conversation about the evolution, development and changes of Louisville’s dining scene.

Scratch a food lover, find a memory bank full of stories about great meals past, real and imagined, along with a few stories about dining disasters. Are things just as good as they used to be, or are they even better? Grab a dish from your favorite restaurant, fill your glass with a tasty beverage, and let’s talk.

This week, celebrating the 20th birthday of LEO Weekly, we’re looking specifically at Louisville’s eats beat for the past 20 years, from 1990 to now.

It’s not really possible to do that, though, without a bit of introductory context, for while we’ve come a long way since 1990, we had already come a long way by that date. Indeed, although I’m not claiming this had any marked effect, 1990 was the year I left the dining critic’s post at The Courier-Journal, having landed in that seat upon the unfortunate demise of the late, great Louisville Times, where I had been a reporter since 1978 and dining critic since 1984.

We thought the city’s dining scene was pretty darn good by that time, and a long history stretched back from there. Louisville had been populated by German and Irish immigrants from the cities of the northeast, while it also gained color and life (and shotgun houses) from 19th-century river traffic from New Orleans.

As a river city in a rural state, we were the bubbling furnace of hell to Kentucky’s Bible Belt, where the dour Scots-Irish migrants who had come across Cumberland Gap could sneak in to gamble, dance, drink, dine and, well, do other things without their neighbors being around to see them do it. Steakhouses, oyster bars, cheap liquor and a bar on every corner made our city a lively magnet even 150 years ago. It’s essential to view our recent evolution as an exceptional place to drink and dine in the light of this bon temps rouler history.

We can trace the growth of our modern dining scene to the mid-’70s, when names still familiar today, Doug Gossman and Bim Deitrich and many more, kicked us up a notch from bar fare and diner chow to bistro dining. They jump-started what was to become the Bardstown Road (and environs) restaurant row with the Bristol Bar & Grille and Jack Fry’s, Formally Myra’s, and other early landmarks.

The ’70s also saw our first exposure to Tex-Mex, with Tumbleweed and what was then the more authentic New Mexico cuisine of Chico’s in Hikes Point overtaking the greasy-spoon joys of the older Chile Bowl on Broadway and the Old Walnut Chile Parlor.

Our parents got the region’s first taste of Chinese in the early postwar years with Hoe Kow in Bowman Field, House of Chen in Shively and Oriental House in St. Matthews, but the ’70s brought us a taste of the spicier pleasures of Sichuanese and Hunanese at Empress and Emperor of China, House of Hunan and others. Even sushi made an early appearance, attracting adventurous diners to a downtown lunch counter that eventually evolved into Sachicoma on Baxter Avenue.

The fabled Casa Grisanti evolved from a spaghetti house into a high-service, pricey “northern” Italian restaurant through whose doors passed many of the chefs and maitre d’s who still entertain us around the city today. The ’70s and ’80s added such upscale dining as 610 Magnolia, Café Metro, Uptown Café, the Seelbach’s restored Oakroom and, firing up the trend of fresh regional ingredients, Lilly’s. By the time LEO launched its first issue in 1990, we thought we had already gone about as far as we could go.

On the contrary, progress continued on many fronts. Our first brewpub, The Silo, opened in the early ’90s, and though it didn’t last, Bluegrass Brewing Co. in St. Matthews, founded in 1993, has showed staying power. Now it has a half-dozen friendly regional competitors, demonstrating “American beer” no longer means industrial swill.

A little bread with your meal? Led by the insane perfection of Blue Dog Bakery, with contributions from other local bakers plus easy access to par-baked quality loaves, fine restaurants began serving first-rate bread as an adjunct to the meal. Upper-tier restaurants sprouted up along Bardstown Road and Baxter Avenue; then, starting with Deitrich’s and the Irish Rover, Frankfort Avenue blossomed as our second restaurant row. Now, add the East Market and Main Street arts district known as NuLu, St. Matthews and even suburban spots like Prospect and Westport Village as emerging clusters of local, independent eateries.

More recently, as the locavore movement has gained traction, there’s been an appetizing increase in tapas, and now gastropubs are coming on fast.

But it may be the ethnic explosion that has truly transformed our dining scene. Overcoming our long-standing whitebread condition in which “ethnic” meant “pizza” or “tacos,” Louisville’s welcoming attitude toward immigrants and refugees has blessed us with a United Nations of good eats. The Mexican and Central American diaspora has gifted us with a range of Latino fare from Bruce Ucan’s Mayan Café and Anthony Lamas’ Nuevo Latino Seviche to authentic taquerias and rosticerias in just about every corner of town.

Fostered by agencies including Kentucky Refugee Ministries and Catholic Charities, Vietnamese immigration since the late 1970s has taught us all to order favorites at Vietnam Kitchen, Annie Café and others either by name or number. Other new immigrants offer us tastes of Bosnia, Ethiopia, Senegal and more. Havana Rumba and Cocos Lokos have made Cuban fare as familiar as steak and potatoes, and there’s hardly a city neighborhood that doesn’t boast a sushi bar and an Indian or Thai eatery nearby.

It’s a delicious and diverse dining scene, to be sure. Who knows what the next two decades will bring?