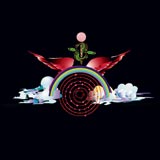 Follow the Train, the semi-active, oft-fluctuating Louisville collective based around mastermind Dennis Sheridan, have always been a slippery proposition. Accordingly, it can be tough to get a bead on Mercury, the band’s long-gestating third LP. It’s steeped in dreamy textures, and several songs stretch to epic lengths too organic to be called psychedelia. After stumbling out of the gate with “Coffee,” Mercury unveils its masterful eight-minute centerpiece “Movin,” whose expansive mix of laconic vocals, plaintive violin and wide-open lead guitar recalls latter-day Camper Van Beethoven. Elsewhere, the lugubrious “Listen” and “Mellwood” are haunting and remarkably textured, while Sheridan wails much of the title track in an eerie, Roger Waters-like cackle. If the rest of Mercury isn’t quite as distinctive, it’s still a highly effective collection that doesn’t just whet the appetite for the band’s continuance, it practically demands it.